A Preview of the Dolphin’s 2016 Season 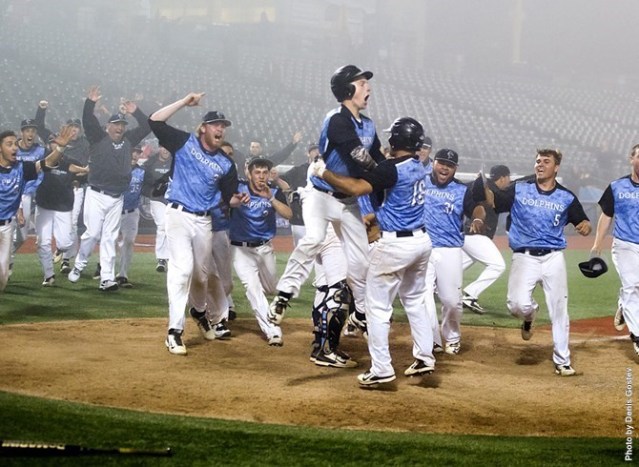 After a Hollywood-esque movie ending to last season, the Dolphins have their eyes set on another CUNYAC Championship title.

It was season of success for the Dolphins in 2015.

With the 2015 Championship victory the Dolphins recorded their 17th CUNYAC title and their fourth in the past six seasons.

Head Coach Michael Mauro enters his seventh season as head coach of the Men’s Baseball squad. Since becoming CSI’s Head Coach, Mauro has provided the school with nothing but success.

In his seven seasons as Head Coach, he has a 168-111 overall record, four CUNYAC titles, and five CUNYAC Coach of the Year accolades under his belt.

The team saw a six game improvement from last season and finished with an overall record of 25-15.

After starting the 2015 season with a 2-5 record, the Dolphins managed to go 23-10 during the remainder of the season.

The Dolphins were at their best when they played at home and against division rivals. With a home record of 15-7 the Dolphins took advantage of playing in front of their home crowd.

However CSI’s record in conference play was more impressive. In games against division rivals the Dolphins were nearly perfect, holding an impressive 7-1 record.

Since Coach Mauro was made Head Coach in 2009, his team has always performed well against division opponents.

Jannace was a dominant closer for his team and has won multiple awards and championships during his Dolphin playing career. He was a three time PSAL Champion, while also being awarded Closer of the Year during the 2014 season.

This year’s roster is comprised of 30 players; five freshmen, eleven sophomores, seven juniors, and five seniors. The team has a nice mixture and balance of both young and old talent.

The team batted an impressive .313 during last year, scored 7.45 runs per game and had a .952 fielding percentage.

Senior infielder Nick Delprete was one of the Dolphins’ most consistent players last season. As a starting infielder, Delprete started every game last season and lead his team in hits. Unfortunately for CSI, their leader in homeruns, RBI, and SLG percentage did not return to the team this season.

Elijah Rodriguez was slugger in the 3 spot and his power will be missed greatly by the Dolphins this season.

Glennerster batted nearly .400 on the season and had the second best batting average in all of CUNYAC. His ability to make contact and impressive speed made him a nightmare for opposing teams.

On the mound, CSI has an impressive array of arms to work with.

With a total of 12 pitchers on the roster, the pitching staff is mostly made up of players who are upperclassmen.

Pitching has been a huge part of Dolphin Baseball.

Last season the Dolphins had the best ERA of any team in CUNYAC and held their opponents to a league leading .301 batting average.

Their team was lead by ace Brian Russell last season, but similar to Rodriguez he too will not return to this year’s roster. Russell was arguably the team’s best pitcher and led the Dolphins in ERA, tied for wins, innings pitched, and strikeouts last season.

The Dolphins will have to look for other players on the current roster to step up in the departure of Wilson from the team. Many of the current pitchers on this year’s roster weren’t on the team last season.

CSI will have to count on some young starting pitchers such as Christian Capellan and Tom Musso to bolster the Dolphins pitching staff. The both of them are sophomores and have limited experience pitching for the Dolphins.

Rounding out the rotation for the Dolphins are Junior Ryan Kennedy and Senior Jason Failla.

In seven games started last season, Kennedy was 3-3. While his record might portray mediocrity he had a solid era of 3.27 and pitched 44.0 innings last season, which was second behind Russell.

Last season, Capellan only made one appearance and was limited to 2.2 innings pitched. He struggled in that limited time but has shown that he has upside.

It’s important that CSI’s starters give the team quality innings.

The Dolphins had only six complete games pitched last season and five of them were from players who aren’t on the current roster.

If the Dolphins want to make another CUNYAC Championship run this season, they are going to need to get quality starts from their pitchers.

Out of the bullpen, Sophomores Peter Bellina and Dan Newman are just some of the many new faces in the Dolphin’s bullpen.

The Dolphins proved last season that they could rely on their defense to get the job done.

CSI had a .952 fielding percentage last season, which was best in CUNYAC and nearly 20 points better than their opponents. Elijah Rodriguez led the Dolphins with 16 errors last season.

Overall as a team, CSI committed 70 errors while their opponents committed 92. Finally their infielders were effective at turning ground balls into double plays.

The team successfully turned 76 double plays while their opposers turned 64. In nearly every defensive stat CSI outmatched other teams.

CSI will play a total of nine games in March and of those nine, seven of them are home games.

The first home game of the year will be played on March 12 against St. Joseph Brooklyn. The Bears were 24-18 last season but struggled on road games.

The Dolphins will open up the month of April with a huge game against Lehman College. Lehman College led CUNYAC in most batting categories last season, including average, home runs, and slugging percentage.

You can expect Lehman College to put CSI’s pitchers to the test and make them earn their outs.

The last time the two faced off was in the CUNYAC Championship game when CSI got the better of them.

The highly anticipated rematch of last year’s championship game will be played on April 30 as a doubleheader in Brooklyn.

This will be the only regular season meeting for the two of them.