Was CSI Athletics’ Take On Midnight Madness A Success? 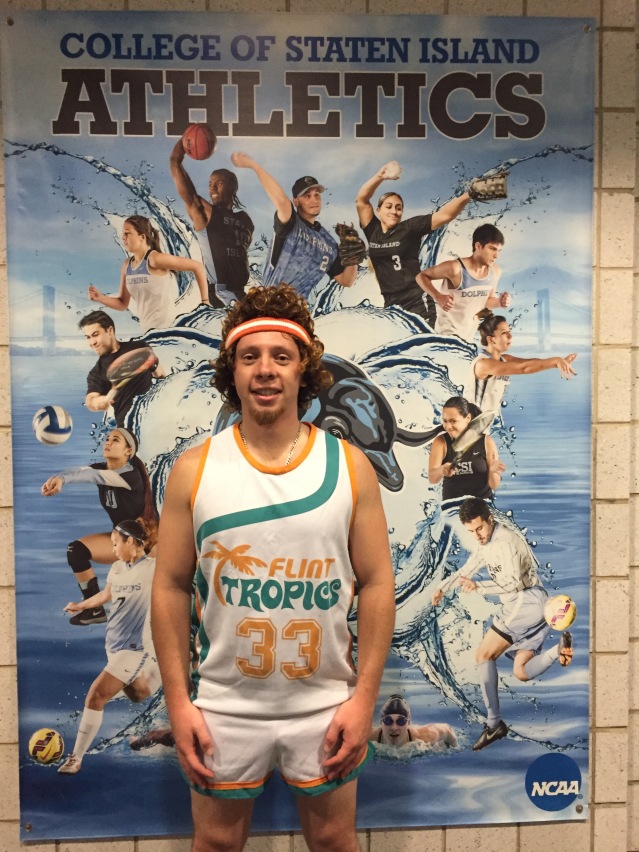 Assistant Sports Information Director Tom dressed up as Jackie Moon from Semi-Pro to compete in one of the competitions. Photo Credit: Alexis Kateridge

The entirety of Dolphin athletics gathered in 1R to partake in Fin-Night Madness, the first annual pep rally for our dolphin sports teams.

A D.J. blared music in one corner of the gym while students sat in the bleachers, wide-eyed and wondering what exactly the night was to have in store.

Then, the lights went out.

Confusion swept the gym as Softball and Tennis players alike looked around wondering what exactly the athletic department was planning here.

The D.J. then went to the center of the gym and started announcing the Sports teams, starting with CSI’s Softball and ending with Cheerleading. But, Basketball was missing.

That was when the cheerleaders lined up by the entrance to the gym and the D.J. began to announce the Women’s Basketball team.

He broke the team down by year, starting out with the freshman and moving up to the seniors.

As the girls entered the gym, they threw t-shirts to the crowd and danced, hyping up the crowd.

After the women were introduced, it was time for the men to enter the gym.

As opposed to the women, the men were introduced by height and name, each given personalized attention as they entered the gym.

Once the last senior entered the gym, it was time for the games to begin.

Each Basketball team picked a few representatives to partake in various games, such as a free-throw game, a three-pointer contest, and a dunking contest.

Majority of the event was spent on Basketball centric competitions, with a musical chairs game and lip-sync battle being department wide.

The crowd was most fired up during these two events because it was inclusive of every sport.

Natalia Sandor of CSI Soccer, said that she “thought it was a valiant effort on the part of the people who organized it to bring the teams closer together and develop a bond between the teams, especially since that is not really existent on campus.”

Samantha MacPherson of CSI Softball said that she “felt like the best parts of the night were when all of the teams were involved.”

While it is true that these two events were fan favorites, the rest of the evening was truly focused on basketball and only basketball.

While it was understandable, because the idea of fin-night madness is that it would mirror midnight madness, a basketball event, many teams found the event to be too focused on the basketball teams.

Jaclyn Kateridge, also of CSI Softball said that she thinks “It was a good idea to have the whole athletic department together, but  it could have been more inclusive.” Something mentioned by multiple people that evening was the suggestion of opening up the events to more of the sports.

For example, some people mentioned adding the other sports in to the mix. Allowing the other teams to partake in the three-pointer or free-throw competition would have made the event more inclusive and fun for the rest of the teams.

Sandor also mentioned that, “It was cool to see the lip-sync battle and to spend more time with my team. But it was more for basketball than anyone else, but I still appreciate the effort to bring the teams together.”

That being said, it was still an amazing event, and Coach Tibbs mentioned trying to keep the tradition alive in the coming years. It will be interesting to see how this event will evolve after its debut this year.

MacPherson also mentioned that she “wouldn’t mind them continuing the tradition, but would enjoy it much better if they were more inclusive.”