A (very geeky) review of My Hero Academia: Heroes Rising

The new My Hero Academia movie goes beyond “Plus Ultra!” and then some 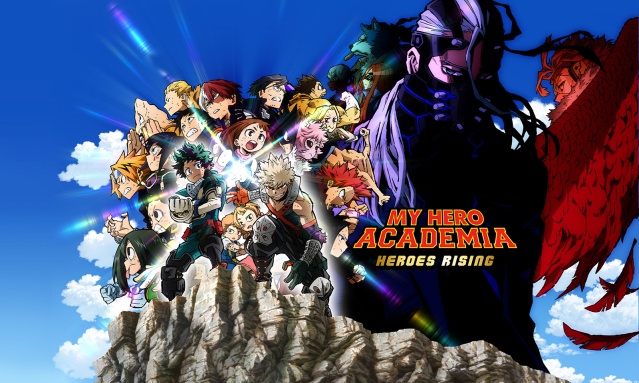 “Heroes Rising” is the newest film in the My Hero Academia franchise. Credit: funimationfilms.com

For the uninitiated, “My Hero Academia” is an anime that takes place in a world where 99% of the population has a “quirk.” This is basically their word for superpowers, and people can use them for either good…or evil.

As a result, there are superheroes that use their powers to defeat the evil villains, including the #1 hero and symbol of peace, All Might. The anime itself focuses on Izuku “Deku” Midoriya and the rest of his class, class 1A, as they train at the hero academia, UA High School, in order to become superheroes.

It turns out the series’ main antagonist, the League of Villains, are up to no good, and have a sinister plan brewing that might just be the most dangerous our heroes have faced yet.

It then cuts to class 1A in a new setting off the mainland, Nabu Island. They were stationed there after the last hero retired and started helping the local islanders with daily tasks.

Seeing these wholesome, slice-of-life moments between the characters and having them do actual hero work on their own is great. It just shows how far they’ve come since fighting robots in the first season.

Deku then meets two kids, Katsuma and Mahoro, who eventually trick him and Deku’s rival and childhood friend, Bakugou, into fighting a fabricated villain.

Of course, it turns out Mahoro was just trying to keep Katsuma safe since he wants to be a hero, and she just wants to keep her little brother safe by proving heroes suck. Though later on, she does end up warming up to them.

However, it turns out Mahoro has a quirk that lets him regenerate cells. This is the main reason the new main villain, Nine, arrives on the island, since he has the ability to steal quirks and wants it in order to fulfill his plans.

He’s also joined by his cohorts Mummy, Slice, and Chimera, and the heroes are pitted against them as they have to both protect Katsuma and the other islanders and stop these fearsome four.

This is when the movie really gets going. The stakes have never felt higher, because our heroes are stuck on an isolated island with no communication, pros, or backup of any kind.

Which means that they have to fight four, powerful villains entirely on their own. Seeing these heroes overcome against all odds is what makes the movie truly compelling.

Not only that, but my main problem with the previous MHA movie, Two Heroes, is that only a select few characters really got a chance to shine.

Yet in this movie, practically every character gets their moment to contribute in some way. Even Mineta, who’s basically just a pervert who can throw sticky balls from his head! And no, I’m not joking.

Of course, the main focus is still on Deku and Bakugou, and it’s really great seeing their rivalry fleshed out more and the two being able to put aside their differences to save the day.

Since this is Studio Bones working on a full-length movie, the animation is of course gorgeous, and the action scenes are so exciting and adrenaline-fueled that they’ll have your jaw drop.

However, the weakest aspect of the movie would have to be the main villain, Nine. While he has an awesome design and is voiced by the amazing Johnny Young Bosch in the dub, who has also voiced Ichigo from “Bleach,” Lelouch from “Code Geass” and Jonathan Joestar from “Jojo’s Bizarre Adventure,” to name a few, as a villain he’s just boring.

Not only does he feel like a diet version of the series’ major villain, All For One, but we barely learn anything about him other than him needing a certain quirk in order to reshape the world for…reasons.

Apparently his backstory, as well as other villains’, is explored more in a spin-off manga, but that’s like having to read a manga to understand Broly’s backstory in the latest Dragon Ball movie.

Even with that, the movie still really shines, and has a pretty satisfying, albeit slightly contrived ending once our heroes inevitably save the day.

So if you’re a MHA fan, go and see this movie in theaters when you can! If you aren’t, but are interested in checking out the series, you should 100% stream it on either Funimation or Crunchyroll.