The Vlog Squad’s Reign Has Come To An End 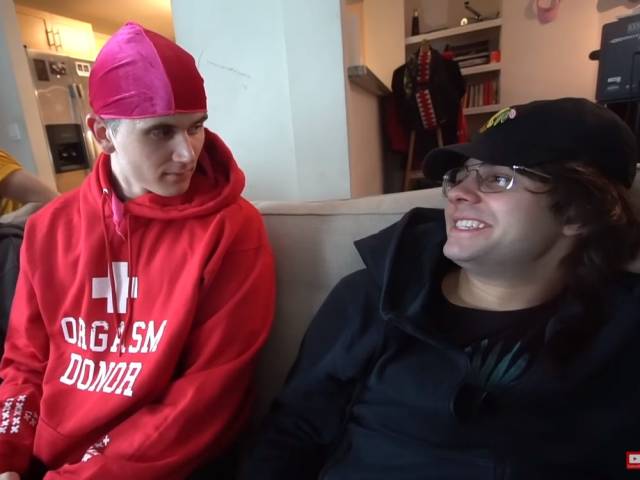 Youtube sensation, 24-year-old David Dobrik is no longer known for giving away Teslas. In November of 2018, Dobrik released a vlog titled, “SHE SHOULD NOT HAVE PLAYED WITH FIRE!!”. In the video, Vlog Squad member Dom Zeglaitis, mainly known as Durte Dom, is seen surrounded by five young women, who he jokes about inviting over to engage in a fivesome.

Dobrik is known for his 420 vlog series, beginning in July of 2015, where he films his friends in bizarre or hectic scenarios for views.

Each member of the Vlog Squad typically had a unique character or purpose, Dom’s being a pervert or womanizer. Earlier in the vlog, David speaks about how Dom had sex with a woman aside from the five girls pictured later on.

“Dom had sex with a girl yesterday and she had such attitude after,” Dobrik said. “I said so how was it? How was having sex with Dom? And she said, “I don’t know, fuck him and find out.””

A few clips after, the Vlog Squad is seen in Dom’s apartment, where he begins addressing inviting the five young women over for a fivesome. David Dobrik is sitting on the couch with the girls, along with Vlog Squad members Jeff Wittek, Jason Nash, Nick Antonyan, Toddy Smith, and former girlfriend of Jason Nash, Trisha Paytas.

After talking to the girls, David narrated that there was no fivesome happening, however, “By some stroke of luck and master negotiating, Dom made progress.” said Dobrik. The camera then pans to the bedroom door where you see two girls and Dom going inside.

Vlog Squad members Jeff Wittek and Nick Antonyan peeked inside and had a headcount of three people in the room, being Dom and two of the five girls.

On March 16th, 2021, an article was launched on Business Insider titled “A woman featured on Youtube star David Dobrik’s channel says she was raped by a Vlog Squad member in 2018 the night they filmed a video about group sex” written by journalist Kat Tenbarge.

Within the article, Tenbarge analyzes David Dobrik’s role in the assault and rape by Dom Zeglaitis. The woman who had come out remained anonymous and was referred to in the article as “Hannah.”

Hannah speaks about her interactions with Zeglaitis, how he had helped get her drunk, and escorted Hannah and her friend, who also remains anonymous, into the bedroom. Hannah said she was nearly unconscious during this experience and that her friend had to please Dom, in the end, to get him away from her.

Hannah had told Business Insider that she was starstruck from the moment she walked in and what was supposed to be casual was overall extremely high pressure.

After the situation happened, Hannah had reached out to Zeglaitis to express how she felt about the situation, prompting him to ask if she would like the video deleted, and it was.

“I also want to acknowledge the women who spoke out against Dom in 2018, I am talking about Ally, and I am talking about other girls that addressed their problems privately or publicly,” Dobrik said. “I am sorry I didn’t listen to you guys. I am sorry that I took Dom’s word for what happened in those certain situations where I didn’t believe you. Not only I didn’t believe you but I made a joke of what kind of person Dom was.”

Dobrik claimed he could not wrap his head around his childhood friend doing these acts.

“Take a moment, especially when creating content that you are trying to get viewership out of, trying to get laughs out of, like really take a moment and look at where the jokes end and the feelings begin.”

The Frenemies podcast hosted by Trisha Paytas and Ethan Klein was posted on March 21st, 2021, where they interviewed Vlog Squad member and Staten Island native, Jeff Wittek about his part in the vlog and events of that night in 2018.

Throughout the interview, Wittek remained extremely confused and frustrated.

Ethan and Trisha display a picture taken in the hallway of the apartment building, of Wittek and other Vlog Squad members. In this photo, there is a girl seen being held up.

“If you saw her blacked-out why wouldn’t you say don’t post this?” said Paytas. “I mean you said David needs to give consent to everything, why would you not post that. You’re thirty and these girls are blacked out, you’re standing right there with the girl being held up.”

Throughout the interview, Wittek proved he was completely uninformed on what information was written in the Business Insider article.

In the past, previous Vlog Squad member Seth Francois had spoken out against the group on an H3 podcast, produced by Ethan Klein as well. In June of 2017, Francois was told to kiss another member, Corinna Kopf for a vlog. Francois, blindfolded, kissed Vlog Squad member Jason Nash, finding this out after the fact.

Francois released a Youtube video titled “Accountability to all creators” where he spoke out against the toxic and racist situations he had experienced while being the only person of color in the group.

This video includes a few clips of the group joking about taking Francois to the police station, offering him things such as watermelon and doing blackface.

After past controversies continued to rise and the release of the Business Insider article, Dobrik has lost hundreds of thousands of subscribers, dropping daily as seen on his Social Blade. Dobrik has lost sponsorships such as Dollar Shave Club and EA Sports. Longtime sponsor, SeatGeek, who had assisted Dobrik in gifting Tesla’s had stated they will be reviewing their deal with him and monitoring the situation.

In addition to the lost sponsorships, Youtube has demonetized all of his videos.

As of Monday, April 5th, 2021, there have been no further updates regarding the situation. However, our thoughts and prayers go out to the victims during this time.