Uprising and Annexation in the Ukraine

The Revolution and the subsequent Crimean crisis draws world’s attention 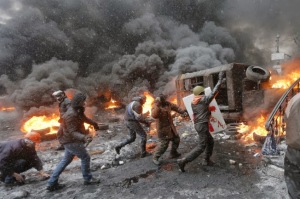 The situation in the Eastern European regional power of Ukraine can easily be defined as one of the greatest global geo-political controversies of this century so far. While the political and social uprising which occurred in Ukraine throughout the winter of 2013-2014 has not given historians any reason to mark it as unique in scope and form, it has become the aftermath of this revolution which has attracted the attention of the entire global community. In fact, while the 2014 Winter Olympics in Sochi, Russia, entertained the world’s greatest athletes, approximately 932 miles from the world’s festivities at Sochi, in the Ukrainian capital of Kiev, protesters and riot police clashed in the middle of the city leaving at least 100 dead and several hundreds injured in total.

Due to the developing nature of this situation in Ukraine, I can only sum up the events leading up to the protests, the protests themselves, and the current aftermath and Russian occupation. As of the publication of this article, former Ukrainian President Viktor Yanukovych has fled Kiev for Russia, prompting the formation of a new government in Ukraine and Russian military forces, to ‘protect’ the Russian-speaking population of the Ukrainian peninsula Crimea, have moved into Crimea and are currently blockading major roads, military and naval bases and the Crimean Parliament will vote in a referendum on March 16th on the issue of secession from Ukraine and the absorption into the Russian Federation.

Let’s start with the causes of the protests. The Yanukovych government has been accused of numerous human rights violations including the imprisonment of pro-European Ukrainian opposition leaders Yulia Tymoshenko and Yuriy Lutsenko – both the figureheads of a pervious 2004 protest in Ukraine known as the ‘Orange Revolution’. But the final straw for the protesters of Ukraine came with the November 21st decree to halt all progress toward a European Union association agreement, which is the basic first step toward becoming a full member of the European Union. Pro-European protesters, disillusioned by Yankovych’s overtures towards stronger Russio-Ukrainian relations, took to the streets and through the use of mobilization via social media, around 2,000 protesters gathered in ‘Independence Square’ in Kiev, starting a four month struggle between protesters around Ukraine and government security forces. This four month struggle between these revolutionary combatants has come to be known as the ‘Euromaidan’ with ‘Euro’ representing the pro-European sentiments of the protesters and ‘Maidan’ coming from the name of ‘Independence Square’ in Ukrainian, “Maidan Nezalezhnosti”.

As the protests grew in scope and violence throughout December and January, Yanukovych looked to President of the Russian Federation, Vladimir Putin, for both funds and advice over the protests. As Putin stressed a firm hand with the protests – with some effect as anti-protesting laws were pushed through Ukrainian parliament on January 16th, which effectively banned all civil liberties and freedoms of speech and assembly – riot police and protesters clashed on several occasions including November 30th, December 1st, and January 19th with dozens injured by police rubber bullets as well as causalities on both sides. The most serious causality rates came in the final throes of the Yanukovych government around late February with security forces found to be resorting to live ammunition in its clashes with protestors. Handgun and sniper fire was heard throughout the streets of Kiev as riot police advanced on barricades on February 20th and 21st; barricades constructed to block major roadways running through Kiev, as well as to defend the main protest base located in ‘Independence Square’. While opposition leaders and President Yanukovych worked out a deal which included serious reforms that were rapidly adopted by the government, it was not enough for the main body of protesters who began to plan a surge in protest activities. On February 22nd, President Yanukovych was discovered to have fled to Russia in exile and protesters rushed to take over the government. By the next day, security forces had abandoned their responsibilities toward defending the Yanukovych regime and Yanukovych himself was wanted for mass crimes against the Ukrainian people. 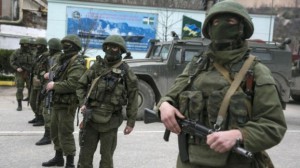 This is when events begin to attain a very serious world-wide connotation. Russian President Putin, although stating in a media interview on March 4th, “If we see this lawlessness starting in eastern regions, if the people ask us for help – in addition to a plea from a legitimate president, which we already have – then we reserve the right to use all the means we possess to protect those citizens. And we consider it quite legitimate…” Putin denied that the masses of uniformed unidentified soldiers blockading most Ukrainian military bases in Crimea are Russian. However, Putin’s willingness to use military force at all in defense of ethnic Russians has drawn numerous comparisons in the media and western countries to Hitler’s invasions of the Sudetenland and Czechoslovakia in the late 1930’s as he claimed he was defending ‘ethnic Germans’ from ‘evil’ governments. An ominous comparison.

Over the coming days, we will see how the United States response will develop as well as the European community’s response and the Ukrainian government’s next move. But moreover, the world will wait on Vladimir Putin’s disposition and whether a Cold War-esque situation will fully develop.

(Update) As of March 16th, the Crimean referendum granted cessation from Ukraine and on March 21st, Russian Parliament voted to annex the Crimea as part of the Russian Federation. Although this decision has been contested by Ukraine and the EU, not to mention not being recognized by the UN, Vladimir Putin drove the initiative home, garnering high approval ratings in Russia.

As Ukrainian armed forces and their families evacuate Crimea, the Ukrainian government has shut off all gas and water flow to Crimea, leaving many in the region without basic utilities. Recent reports include that approximately 30,000 Russian troops have amassed at the Ukraine-Russian border. Talks continue between U.S. Secretary of State John Kerry and Russian Foreign Minister Sergey Lavrov.