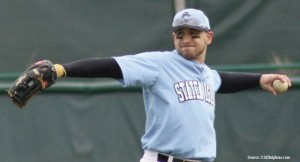 After advancing to the CUNYAC championships two years in a row and winning it last year, the men’s baseball club will get a fresh start with five seniors leaving. There are 13 freshmen and a total of 16 new players that will help fifth year manager, Michael Mauro, shape the team.

The Dolphins first showcased their new squad not in New York, but in South Carolina, where they took part in the Cal Ripkin Division III Experience. Coach Mauro plugged in a few of his freshmen into starting spots, and none played a bigger role than Nick Delprete. “I got a nice second baseman, Delprete. He’s gonna start right away,” said Coach Mauro. “I also have a pitcher, Chris Falcone, he’s a lefty that actually transferred from Felician college. He’s gonna be good.”

Delprete started 4 of 5 games at second base and was featured in the leadoff spot for each start. Other newcomers that were used as starters in South Carolina were third baseman Tilson Brito, catcher Frank Sconzo, and pitcher Falcone.

Overall, the team went 2-3 against some tough competition. When they return home, they will get a chance to improve on that record with five straight home games. With the amount of first year players, coach isn’t worried about way the season has started thus far.

“The good thing is I have enough leftover kids that have played in the championship game to kind of feed off the younger guys,” said Mauro. “To let them know what we expect and how hard it is to get to the championship game. So I’m not really worried about that cause the freshmen that came in kind of bought into the system. So they kind of understand what we do.”

One of the biggest strengths to last years ball club was the number one ranked defense to back up their strong pitchers. That defense is expected to take a hit with the inexperienced college players, but coach Mauro believes his defense only got better.

“The first 5 games we played in South Carolina, we made three errors so we’ve done well,” said Mauro. “Our defense is probably our strongest point so I’m happy about that.” Another key to the season will be the returning players. Guys like outfielder Will DiFede, infielder Joseph Palmeri, pitcher Anthony Storz, pitcher and infielder John Baggs, and lone senior, Chris Ramanauskas made major contributions to the team last year and will look to follow it up.

DiFede was able to maintain a batting average of .340. Palmeri and Baggs hit .284 and .308, respectively, while Storz held an era under 2.00 in limited action. Ramanauskas was able to hit above .400 last season and reach base in half of his at bats. In his final season, he will be a huge part to the teams success moving forward in 2014.

“He’s the only senior on the team and he did everything last year,” said Mauro. “He’s very valuable because all these kids get to see how much hard work he puts in and the results and it rubs off on other kids. So he’s gonna be our big leader for this year.”

With a handful of returning players, the team was able to do a great job recruiting pieces to keep them in the hunt for the CUNY title. More importantly, if a good amount of the freshmen can take on important roles, it will help the team keep contending for years to come.