“Zootopia” Preys on Our Hearts 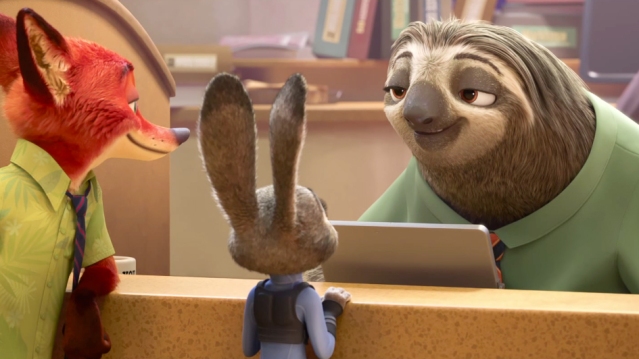 Walt Disney Picture’s 55th feature welcomes you to the concrete jungle of “Zootopia”, where animals, both predators and prey, live and work together as one. Much like real life, this PG rated animated film touches upon controversial issues like stereotypes, prejudices, classism, sexism, discrimination, bullying, etc. in ways both children and adults can enjoy.

Judy Hopps, voiced by Ginnifer Goodwin, is the very first bunny cop on the police force who is just trying to make Zootopia a better place to live.

In an occupation where predators dominate and she is ridiculed for her race and size, she is determined to prove herself by solving a large missing person’s case.

Along the way, the smooth talking, scam-artist fox known as Nick Wilde, voiced by Jason Bateman, helps Hopps with her case and together they learn their mystery is much bigger than they thought.

This movie went way above and beyond in their themes, references, plot and characters.

Frozen may have music, but this had so many good, strong, important lessons for children.

The characters in the film judged each other harshly based on if they were predators or prey.

The prey animals got bullied by predators because they’re small and weak but capable of becoming more if they tried, and predators got labeled as monsters even though they may be kind.

The animals created all different kinds of stereotypes against other types of animals, so you can’t call a bunny “cute” because that’s only okay if other bunnies say it to each other.

It was also difficult for prey animals to move up the social ladder even though prey animals were 90% of the population, predator animals had more privilege.

Their mayor was of course the king of the jungle, a lion, which actually brought about a lot of political jokes.

Hopps learned how politicians deal with the press, by saying their own question and then answering it.

Although it wasn’t apparent, I felt there was also a strong sense of feminism because the main protagonist was a small, female bunny, who needed to be strong, tough, and smart in order to make it as an officer.

Her male superior would put her down by giving her near impossible quotas, a monotonous position, and then tried to get her to quit. Sounds pretty familiar to me ladies. Mayor Lionheart also treated his assistant mayor, a female sheep, with disrespect and no appreciation.

There is also the issue of Hopps’ parents not encouraging her to achieve her dreams because they would rather she be “safe” and “settle” because they settled “hard”. They told her she should stay home and have (literally) hundreds of kids.

This is the most realistic parents I’ve ever seen in a Disney film, and neither of them die.

Discrimination became widespread panic in the film because predators, for some reason, were starting to go completely savage.

The harmony in Zootopia was falling apart because all of these animals felt unsafe around each other.

Although this was a part of a much bigger plan, they show how deep rooted these feelings were ingrained in characters because of traumatic experiences in their childhood.

Hopps was bullied by a fox, and Wilde was hazed and muzzled by fellow prey boy scouts.

If Wilde wasn’t treated like a savage from the start, he may not have decided to become a criminal.

There are so many fun references in this film! There are references to other Disney films, to “The Godfather”, and to “Breaking Bad”.

The way they pay homage is just priceless. I mean, when Mr. Big says he wants someone iced, he literally means put in ice.

Shakira is also in the film as pop star Gazelle, who encourages the main character to do things she’s never done before with her song, “Try Everything”.

There is an app in the film where characters put their faces on Gazelle’s dancers to pretend like they’re performing with her. This is now a real app you can actually download.

Hopps and Wilde make this great team because she has the knowledge of the law and quick wit, while he has street smart and charisma.

Although they allude to possibly having a romantic relationship, it’s not necessarily clear. Their personalities complement each other so well.

They have so much in common with their pasts and both prove themselves to be different than what everyone thought they were.