CSI student Andrea Dalzell won the CUNY Women’s Center Council Award for Students In Service to Women Recognition for her involvement in student affairs on campus.

Nine out of 25 CUNYs have women’s centers on their campus’ and this is the second year they have collectively chosen recipients to receive this award.

Dalzell was co-nominated by the current head of the Bertha Harris Women’s Center at CSI, Alyson Bardsley and the previous leader Dr. Ellen Goldner.

“[Dalzell] is a very civic minded person,” said Bardsley. “In context with the other women nominated, she’s in good company.”

Dalzell was awarded for her involvement throughout campus, not just the women’s center, according to Bardsley. Dalzell is the commissioner for Students with Disabilities and Veteran Affairs. She is also the former Miss Wheelchair New York.

“How awesome is it to know that I’m seen and acknowledged among my peers for being me and working toward change,” said Dalzell in a Facebook post. “It is always shocking when I get an award because I don’t do what I do for recognition. I do what I do because it paves the way for the next person.”

Dalzell says her story could not compare to the other women awarded, but “I’m doing something right, even if I don’t recognize it.”

Dalzell is a Nursing student, set to graduate within the year. She told The Banner in an interview she wants to go into the medical field because, “I’ve been a patient for so much of my life, so why not be on the opposite side for a change?”

She regards Carol Brower and Robert Kee as being her mentors throughout her college experience.

“Sisters Helping Sisters” was the theme of the award ceremony on March 29. Among the crowd of guests were panelists Kenya Handy, Nadia Lopez and Desiree Walker.

Handy serves as the Brooklyn Borough Director for Public Affairs at the Office of New York City Comptroller Scott M. Stringer. Handy’s previous initiative was the Congressional Caribbean Caucus, focused on issues that specifically affect the Caribbean and Caribbean Americans.

She was also a part of the Sojourner Truth Legacy Project sponsored by the Congressional Black Caucus Foundation, that aimed to educate and empower black women to become more involved in the political process.

Lopez is the Principal of Mott Hall Bridges Academy, a New York City Public School that launched in 2010. Her mission is to inspire young people from underprivileged communities to “beat the odds” and create a positive institutional environment for them. Lopez was featured on the photography blog, Humans of New York, and appeared on the Ellen Show. 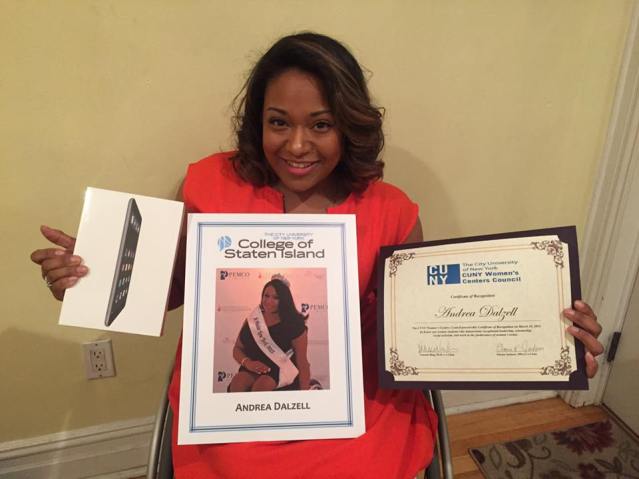 Walker is a health educator, cancer patient advocate as well as a cancer survivor. The core of her advocacy is to encourage patients to feel empowered in their mind, body, and soul. Walker also trains medical students and doctors on how to deliver disappointing news to patients and their families.

She volunteers at the Witness Project of Harlem, Survivors in Spirits, and SHARE, dedicated experienced support for women facing breast and ovarian cancers.

Rahima Sajid was nominated by CSI leaders last year because there is no women’s center at her college, Baruch. Sources say that when Sajid offered the idea to Baruch administration to start a women’s organization it was not followed up with.

“Some people may feel like feminism is over,” said Bardsley when asked why less CUNYs have women centers. “Our women gender studies program is intellect and academic combined.”

“[The women’s center] runs on student energy,” said Bardsley. “All the women nominated for this award are really amazing.”

The night, according to those that went, was about sharing the accomplishments of women throughout CUNY.

“CUNY students are already spread thin,” said Bardsley. “If these women can take the time to do what they do as well, that’s just amazing.”