Our prayers have been answered: the dreaded, pot-hole filled, hazardous, narrow, loop road of CSI is now being completely rehabilitated spacious, smooth, functional pavement we have all hoped and dreamed of.

Construction of the loop road began in early August and is projected to be completed by mid-December. This project will cause traffic inconvenience, which isn’t new for CSI dwellers, but will be worth the hassle and patience in the end.

In the meantime, access to buildings and parking will be maintained, traffic may be reduced to one lane and sometimes sections of roadway will be out of service. 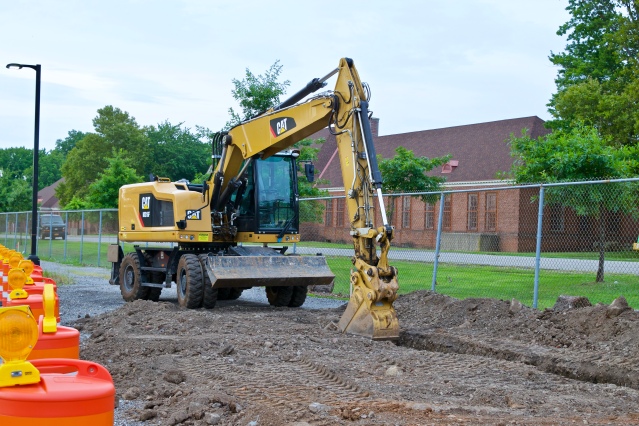 The loop road’s construction includes new gutters, curbs, a new storm drainage system—hence the big black tubes—and a pothole-free surface. This means not resurfacing the existing road, which was our previous temporary fix to a much larger issue.

The Dormitory Authority of the State of New York (DASNY) is doing the project which will be conducted in 10 phases, as shown by the phase blueprint.

Cameron Christensen, Assistant Vice President of Campus Planning and Facilities Management, and Hope Berte, Executive Director of Human Resources and Labor, wrote on CSIToday that Phase 1 will consist of “Replacing the southernmost roadway stretching from 6S to 5S. The straightening of the Loop Road by parking lot #4. Replacing the roadway leading up to parking lot #1 by the softball field.”

Lillian McGinn, the Director of New Campus Development, explained the long process of making this happen, as well as, just how needed this project was.

“The college has over three miles of roadway originally installed in 1993 when we moved to the campus from Sunnyside, though it lacked curbing that would help to control water erosion,” she said.

“While it has been maintained by patching, it was determined that the entire loop road needed to undergo a major rehabilitation to repair the erosion caused by the water underpinning its infrastructure.”

According to McGinn, many of our pothole repairs were patched up by a contractor, which only cost hundreds of dollars to resurface as a quick fix, but did not address “the underlying problem of water management and the erosion of the roadway base.”

Realizing this, the planning started in 2012 where the roadway was reviewed and costs would be determined.

It was here that it was decided the east side roadway would be straightened while still including a parking lot. The northern section of roadway would be realigned and would include pedestrian-safe walkways. Also, the curbing addition and a storm catch basin would keep the road smooth and pothole-free.

In June 2014, H2M, Architects and Engineers, studied our core sampling and traffic volume counts, the scope of this reconstruction was changed to apply to the entire loop road and not just eroded areas.

To make this happen, the college got funding through the CUNY Critical Maintenance program.

According to McGinn, the funding came over the span of several years, “starting from funds from CM FY11/12, up through additional funding FY14/15. The budget for this project is $9,047,000.”

Even with this project in motion, there are many other renovations going on as well.

“Currently 7 buildings—1A, 2A, 3A, 1N, 2N, 3S and 5S are having gutters and leaders installed with water management to an underground detention system that will allow for grey water to be used in the College’s irrigation system. The four academic buildings in this project are having a new hardscape design at each of their entrances,” said McGinn.

McGinn also informed that 2M, across from our gym, has been renovated with new classrooms for School of Business at CSI and that our soccer field will soon have new fencing, bleachers, press box and lighting.

As progress is made, McGinn, as well as the rest of the Campus Planning Office, wants students to know, “There is no doubt that students, faculty, staff and visitors to the campus will be inconvenienced for portions of this project. We are strongly advising students, staff and faculty to plan for extra time while navigating the campus and to be mindful of traffic pattern changes and posted signage.”

Keep an eye out on your CSI email accounts for updates on the project from the college’s administration.