Resources and Agencies Available for You 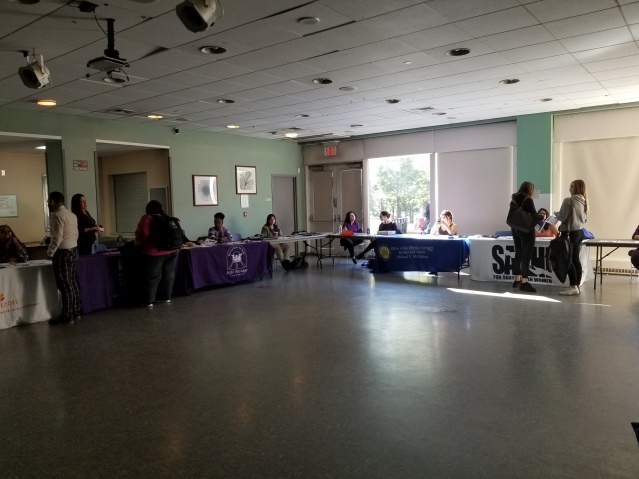 October is the month of Breast Cancer Awareness, but it’s also the month for domestic violence.

On October 19, CSI held a special event to spread awareness and resources for students at the Campus Center.

Although you would assume representatives of these agencies would be forthcoming about information on their services, some were not so and it was strangely suspicious.

One agency for domestic violence responded with, “I can’t tell you that. You’ll have to call the Mayor’s office and speak to them,” when asked about the services they offer.

Even with the secretive responses, information was still given to students.

Many of the agencies provided statistical information, as well as services, to broaden people’s perspectives on the prevalence of domestic violence.

Jennifer Hernandez-Baniqued, Staten Island community director of Safe Horizon – the largest victim service agency – stated that “one out of four females will discuss or report incidents of domestic violence as well as one out of seven men.”

The chances of experiencing domestic violence are even higher for the hispanic population. According to Hernandez-Baniqued, it is one out of three.

The reason for this could be because of their undocumented immigration status which causes a fear of deportation when reporting a crime, and not being able to communicate well because English is usually their second language.

She also mentioned that Safe Horizon helps victims through programs, family court, health clinics and a hotline that people can call if they have experienced domestic violence.

Organizations for South Asian women (Sakhi) and Arabs (Arab-American Family Support Center) were also present at the event to remind students that domestic violence occurs in every culture.

A representative for Sakhi for South Asian Women stated that “Sakhi works to empower South Asian women for domestic violence and sexual assaults.”

According to their website, “2 in 5 South Asian immigrant women in the U.S. are survivors of domestic violence.”

The process for helping clients of domestic violence starts with accessing the initial crisis they are in, checking if they are able to stay with their spouse or partner and asking about the conditions of living in the household.

After acquiring this background knowledge about the client, the agency then provides them with options for financial assistance through economic programs, empowerment through youth programs and help for children who are affected by the violence as well.

Michelle Arias from the Safe Passage Program shed light on her duty as the economic empowerment specialist.

Natalie Serra and Melissa Paquette, attorneys for Safe Horizon, believe it is important to have this type of event at colleges.

“With students, there’s definitely domestic violence in the college setting, maybe not well known,” said Serra. “But it is important for students to know that organizations like this are here.” This is why the event took place.

Arias from Safe Passage also mentioned that because this happens at home, there are not that many people who want to talk about it.

Safe Passage, like the other agencies, want to give those who are silent a voice.

Arias also wanted to remind us that abuse “is not always physical, but it can also be financial and psychological.”

Even if you are not experiencing the violence yourself, it is good to know what resources are available on Staten Island so you can refer someone you know who could be in danger.

The Office of the District Attorney of Richmond County, refused to comment and recommended to speak with a higher authority to obtain answers.

The goal of this event was clear.

It was as Sakhi noted, there are not that many resources on Staten Island, which is why it’s so important to reach out  and “connect them with resources; connect them to that so as to empower them.”

If you have ever experienced violence with a partner, know there is help out there for you and people will listen.