Behind the Scenes of The Writing Center 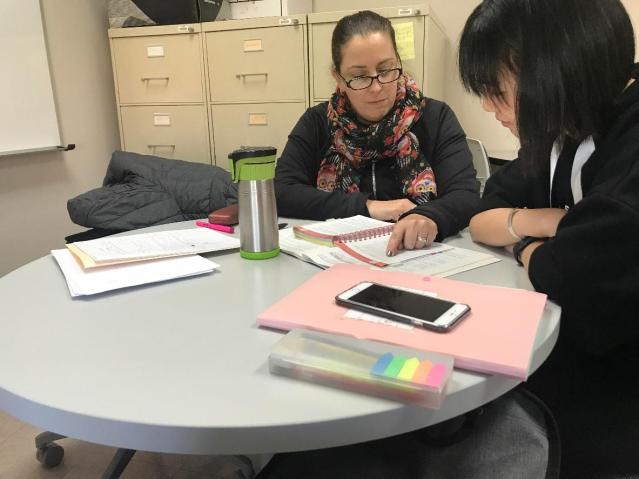 Kantor finds ways to assist students depending on their individual needs.

Anna Kantor works as an assistant at the College of Staten Island and uses her previous experiences as a student to guide others.

Though it is not uncommon for students to begin working at the CSI while also attending, the job opportunities vary.

As a college assistant, primarily in the Writing Center, Kantor’s job is to support students and help them improve their writing outside of class.

Kantor’s background in psychology allows her to comprehend different ways to assist students in their struggles, which in turn may be affecting their writing.

“I actually got my Masters in counseling. Because of tutoring people, sometimes people come in and they’re upset, and it isn’t really the English that’s the problem,” Kantor mentions.

Not often do non-English majors find themselves actively working in the Writing Center at CSI.

However, the lack of direct involvement with English as a major does not affect her skills as a college assistant in the Writing Center.

In fact, her degree in psychology proves to be very helpful to further assist students.

While writing properly is a skill that is highly valuable, regardless of one’s major, the level of involvement varies.

Kantor’s initial intention was not to major in psychology and work at CSI; she had initially began her college career with liberal arts as her major.

“After 9/11, with all the devastation, and how people needed so much help, I told myself ‘I need to major in psychology’,” Kantor said.

Aside from gaining this incentive, her motivation to originally pursue her college career revolved around the disappointment of a job denial due to her lack of college education.

“I felt so let down that I didn’t get that education, that job. It really motivated me to get the degree because it limited job offerings,” Kantor stated.

Though she now has the degrees she pursued, the primary reason to remain with her part-time job at CSI is the passion for helping students who are struggling.

Kantor views her role as a college assistant to be one step closer to her goal as a counsellor in the near future.

Kantor commented, “This is as close as I get. I get to tutor people, I get to learn all kinds of subjects. That’s my passion. I have the need to help other people [and to] have a person to turn to.”

Kantor’s ways of approaching students were put to the test prior to her employment with CSI.

Robert Brandt, English professor and Director of the Writing Center, mentioned, “I observed how well she worked with other students when I had her in a class of mine.”

After Kantor was placed in a situation where she assisted her former classmates with their writing, she was able to explore her talents and general knowledge.

Tiffani Roberts, a student at CSI, has had Kantor’s support from very early in her college career.

“She explains everything very well, finding different ways to explain everything in ways myself and others can understand,” Roberts said.

Roberts believes Kantor truly goes above and beyond.

“For me, it’s the passion to help people help themselves. Teach them how to [improve], whether it be psychologically or academically. That’s what’s important,” Kantor said.