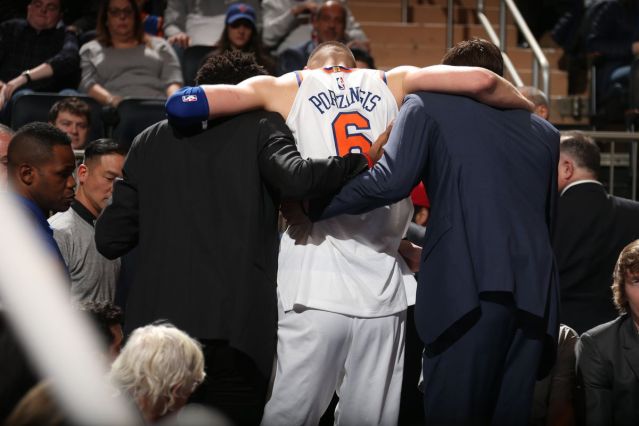 Kristaps Porzingis is helped off the court after his gruesome ACL tear. (Credit: sbnation.com)

More of the same old ways haunt the New York Knicks yet again this season.

With an enthusiastic beginning to the season, the Knicks looked poised to abandon the Carmelo Anthony era and start anew.

The incredible start for Kristaps Porzingis, as well as additions like Enes Kanter and Tim Hardaway Jr. jolted the team to a brief high point in both energy and productivity not achieved in years.

Much like last year, though, the season has come crashing down to a halt, with key injuries and poor execution to blame.

Just to add salt to the Knicks wound, first time All-Star Kristaps Porzingis tore the ACL muscle in his left knee in a February 6 game against the Milwaukee Bucks, putting a cap on an aggravating year so far.

An injury such as this can take up to 12 months to recover from, the last thing the Knicks could have wanted during this rebuild period.

Porzingis was having a career year before the injury, being among the tops in the NBA in blocks-per-game and putting up career high offensive numbers while being selected to his first All-Star game.

Unfortunately, Porzingis will miss the festivities, just two weeks before the start of the All-Star break.

The Knicks as a team showed sparks of something special in the first twenty games of the season, but it was not meant to be.

A combination of lackluster defense, blowing 20+ point leads, and not securing victories while ahead in the fourth quarter all contributed to a lost season for the Knicks, now relegated to counting the days until the offseason begins.

Willy Hernangomez, an underused center, was pushed down the depth chart and nearly forgotten about all season. This was enough for him to request a trade, eventually being dealt on the Charlotte Hornets.

The trade deadline also had the Knicks acquire French point guard Emmanuel Mudiay from the Denver Nuggets in a three team deal.

Knicks forward Doug McDermott was sent from the Knicks to the Dallas Mavericks, as well as point guard Devin Harris from Dallas to Denver to complete the deal.

Despite the negativity permeating from the Knicks, a few bright spots shined through the darkness this year, especially in that of forward Michael Beasley.

The former second overall pick in the 2011 NBA Draft has provided a fantastic offensive spark off the bench for the Knicks, predominantly playing during Porzingis’s absences this year.

As of February 10, Beasley has averaged an impressive 12.6 PPG playing in just 19.8 MPG, as well as shooting a staggering 51% from the field.

Beasley’s playing time will surely increase with Porzingis now shelved for the rest of this season, and most probably a portion of next season as well.

Other players like Enes Kanter, Kyle O’Quinn and Courtney Lee have all had solid seasons, though their time in New York may be limited. Kanter, though, hopes this does not come to fruition for him.

Courtney Lee set the record for most consecutive free throws made with 46, beating out former record holder Chris Duhon and his 44 straight makes back in 2008.

For now, the Knicks will look to the future not just in acquiring new players, but for a positive rehab and anticipated return of Porzingis sometime in 2019.