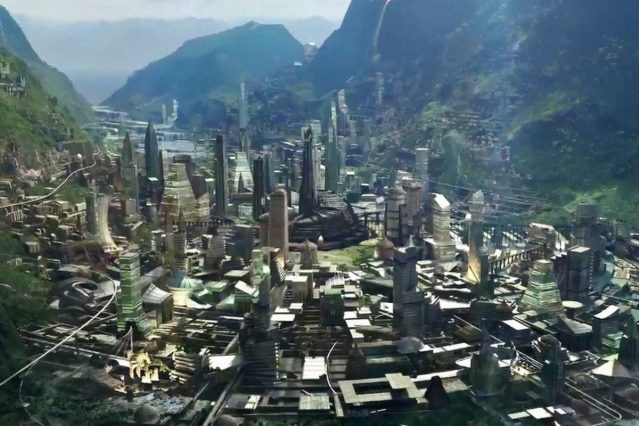 “Wakanda Forever” has been the slogan for the secretive country, pictured above. (Credit: relevantmagazine.com)

What was initially thought as a third-world country was revealed to be the most advanced country in the world.

In a recent visit to the United Nations, Wakanda’s King, T’Challa, revealed that he no longer wants the country to be in isolation and would like to share their advancements in technology with the rest of the world.

This technology, which King T’Challa revealed, is called “vibranium”, a type of metal that was first carried by a meteorite that crashed down to Earth 10,000 years ago, is said to be the answer to Wakanda’s advanced technology.

However, little is known about the alien metal and how the Kingdom of Wakanda is able to resource it.

According to the government of Wakanda, they have about 10,000 tons of vibranium, which according to Wakandan officials, costs about $10,000 per gram. This, in turn, would be the biggest GDP of any existing country in the world.

The government of Wakanda describes the metal as “sound-absorbing”, meaning that it could withstand any attempt of breaking. It is said that a man has tried and successfully stolen a tiny amount of vibranium from the country, but that has neither been confirmed or denied by the Kingdom of Wakanda.

Another hot rumor that has been going around since the revelation is the shield that Captain America uses is made up of vibranium, but that is not confirmed nor is there enough information as to how vibranium was “snuck” out of Wakanda.

Upon hearing these revelations, the Trump administration was just as surprised as the rest of the world.

President Trump took to twitter, to share his reaction to the stunning announcement, saying “Twisted T’Challa of Wakanda says they want to share their technological advancements to the world! FAKE NEWS!”. In another tweet, President Trump also remarked that “vibranium is NOT THE STRONGEST METAL!! ITS AMERICAN STEEL!”

In a recent press conference, Sarah Huckabee-Sanders, the communications director, stated that the “administration is cautious of T’Challa’s decision to open up to the world and fears that they would be stiff competition” in regard to trade.

Many countries that make up most of the United Nations have embraced King T’Challa’s opening of Wakanda.

The United Nations Secretary General, Antonio Guterres, has stated that they “have embraced the King’s reversal of isolation and are willing to work with King T’Challa and the Kingdom of Wakanda” regarding Wakanda’s apparent abundance of vibranium.

Wakanda, a country that could be found north of Lake Turkana and neighboring the countries of Kenya, Ethiopia, Uganda and South Sudan, was regarded as a third-world country, dissolute of a functioning economy and filled with poverty.

The Kingdom of Wakanda has not given an explanation as to how they kept their true appearance hidden. Sources within S.H.I.E.L.D have speculated that Wakanda built a disguising doom over the country that was powered by the vibranium metal.

The explanation of vibranium by the Kingdom of Wakanda sounds like something that was pulled out of comics but they, however, insist that it is true and so far have not been wrong.

The third-world country that once was could be a key contributor to the world economy and could bring upon a new and more transformative technological revolution, according to highly regarded economists.

Little is known about the Kingdom of Wakanda and its King but that will soon change when the world will be able to take a closer look at the mystical country.