Campus Sustainability and the Organization That is Paving the Way

How the SSO Hopes to Build a Better CSI 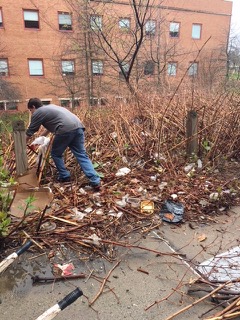 The Sustainable Student Organization (SSO) began in the fall of 2017 when SSO president and founder, Natalia Sandor, noticed a need for greater student involvement in the sustainability efforts at the college.

As of September 2018, the SSO became a chartered club at CSI and continues to make strides in the sustainability efforts on campus today.

The group’s first main project was centered around the eradication of the Japanese Knotweed that took over a large area outside of 6S.

The members have spent months cleaning up garbage, un-rooting the invasive species and laying down mulch in order to beautify the area.

The members call the space “the pit” and have helped pull off a huge transformation. The SSO members have even built four raised beds for their fruit and vegetable plants in the space, most of which started in the greenhouse as seedlings.

The SSO has had a huge hand in revitalizing the greenhouse inside of 6S, where they grow and learn about various plants under the leadership of Kinnea Keating, a botanist on campus.

Marc Girgenti, a student at CSI, is the garden and greenhouse manager who has been vital in the implementation of these green initiatives.

The plants grown in the greenhouse were sold by members of the group in a plant sale which was made possible through their collaboration with the Biology Department. The leftover plants were then brought into the pit and have flourished in the newly transformed area.

In the spring of 2018, the club organized an energy competition within Dolphin Cove where they measured the energy consumption of each floor. This pilot was incredibly successful and allowed the group to bring awareness to the impact that individuals have on the environment.

“I am pleased with achievements of the club”, says Nora Santiago who is the SSO’s advisor and number one supporter. Santiago has been a wave maker in the efforts to create a more environmentally conscious campus.

Santiago is a Geographic Information Systems (GIS) specialist that works directly with the Department of Economic Development, both in which have provided endless support and encouragement to the SSO.

Santiago says, “The member’s enthusiasm towards sustainability and the efforts they have made make CSI a greener campus”. It is this enthusiasm and the member’s willingness to put in long hours as well as intense physical labor that has allowed the group to make visible change.

The club is currently collaborating with the athletic department in a bottle drive competition between individual sports team as well as the administration in 1R. The collection and sorting of these redeemable bottles will continue until the end of the semester.

The bottle drive is now expanding to the campus center as the group will chair a table in collaboration with the Melissa Reggio Program. The SSO will also be posting weekly standings so that the sports teams can be incentivized to properly dispose of recyclables through a little friendly competition.

Alexis Kateridge, the club’s secretary states, “Sustainability is such a vital aspect of our future. In the short time that the SSO has been a club we have made so much progress, and we are looking forward to continuing to make changes to not only the way that the college handles sustainability, but also the students as well.”

Kateridge adds, “Over the last few months we have undertaken many projects to create a more sustainable environment on campus, whether it be running an energy competition at the dorms or by refurbishing and starting up the greenhouse in 6s, and this is just the beginning.”

The SSO will be hosting a composting workshop on November 29th with members from the Snug Harbor Cultural Center where they will be building a Garden Gourmet Bin and collecting food scraps. Moving forward, the club will be utilizing this composting system to help with their gardening in the future.

The SSO is disrupting the status quo and implementing initiatives that will help make CSI more sustainable. It is the efforts of the SSO members that has brought attention to their mission and that will continue to impact the campus.