Oprah to Rally At CSI Next Fall

The Renowned Candidate is Taking Her Campaign to the Great Lawn 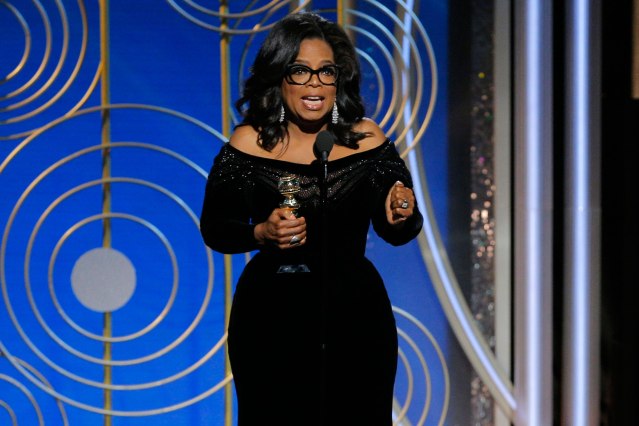 Winfrey accepted her Golden Globes Award and revealed her bid for 2020 in January. (Credit: Entertainment Weekly)

The race for 2020 has taken off and is sure to be an exciting one for voters. The past election has shown that a celebrity is capable of claiming the presidency and this upcoming election is no different.

Among the various candidates to run is TV icon Oprah Winfrey. The talk show host, executive, and media mogul will begin campaigning on the east coast this summer into early fall, according to her official website.

Her key stop in New York City is The College of Staten Island. Although Winfrey is a member of the Democratic Party and likely to win New York if she makes the nomination, her campaign strategy is to mobilize students.

At 204 acres, CSI is the largest college campus in New York City and surely has the space and accessibility for Winfrey’s rally.

Campus Planning and Public Safety have been working closely with Winfrey’s campaign staff as the rally approaches. The event will be held on CSI’s Great Lawn, the vast area between 1P and 3A.

The college holds its Commencement ceremony on the Great Lawn every May. In the fall, hundreds will be able to witness Winfrey speak.

The major rally is expected to bring prospective students to CSI. In anticipation of this, the college will be maintaining the Great Lawn and repairing facilities as the date gets closer.

The college also considered holding the rally indoors at 1P, but the massive turnout is expected to take up more space. There are approximately 1000 seats available for the event and tickets will sell out fast once they are released to the public.

This news comes just three months after Winfrey revealed her 2020 bid at her Golden Globes speech on January 7th. The icon accepted her Lifetime Achievement award with an inspirational message to women in light of the #MeToo Movement and a vision for the country.

The Washington Post reports that Winfrey poses a major threat to President Trump’s campaign for reelection.

The billionaire producer has the power to connect and reach people of all backgrounds, as The Oprah Winfrey Show is the highest-rated daytime talk show in America. Winfrey’s influence stretches across the country while most other candidates for 2020 have only served their state or city.

Winfrey has stated that she is apolitical, and has voted for both Democrats and Republicans in the past. She took a conservative stance and opposed the Iraq War, reported Business Insider.

Today, her views on the campaign trail align with most Democrats: gender equality, immigration reform, and gun control.

“Winfrey has expressed pro-gun control views, is pro-LGBT rights, and has come out in favor of providing a path to citizenship for the millions of undocumented Americans protected by the Deferred Action for Childhood Arrivals program,” according to Business Insider.

Winfrey plans to spend a considerable amount of time campaigning in her hometown of Mississippi in the spring. She will slowly make her way up the east coast and will visit CSI in early fall just as the new semester begins.

While the exact date of the event is yet to be released, students should check their emails in the meantime as updates and tickets on the rally become available.