Are the NBA Playoffs Better off Without Lebron James?

Lebron Missing Playoffs Can be Positive for the NBA 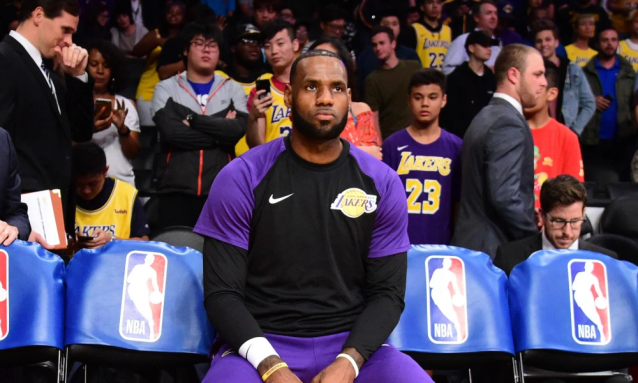 Lebron James is sitting on the bench wondering how his team is going to improve next season.
Photo Credit: USA Today

Los Angeles Lakers star player Lebron James will miss the playoffs for the first time since the 2004-05 NBA season, and he will also miss the playoffs in his first season as a Laker. What does this mean for the NBA?

James has had an impressive run making the NBA Finals for eight straight seasons before becoming a Laker. He did it with the Miami Heat for his first four years there, then he went back to Cleveland, which was his first team that he played for in his career, and went four straight years to the Finals with them.

He won two championships with Miami and one with Cleveland.

Since the Golden State Warriors have been the NBA powerhouse the past four years now, not even Lebron and whatever team he was on could’ve stopped them. However, with this current NBA season, a vast majority of teams have improved and have a great chance at stopping the Warriors.

Lebron James missing the playoffs makes it more interesting because his team was not up to par this year and did not meet the expectations of the team they were expected to be. Lebron suffered a groin injury after a Christmas blowout victory against the Warriors, and as shocking as that sounds, missed 17 straight games.

This turned out to be the most noteworthy injury of his career. In general, the Lakers lost other players due to injuries this year such as Lonzo Ball, Kyle Kuzma and Brandon Ingram who are other core members to this team which disrupted the flow of the team. The Lakers couldn’t get it together which made them evidently miss the playoffs this season.

So, is this a beneficial matter for the NBA? I do not see why not.

Although Lebron has a large fanbase, this allows the playoffs to be more competitive and NBA fans like myself want to see a competitive atmosphere. If Lebron was to make the playoffs, he could’ve figured out a way to go through the teams in the Western Conference and potentially go to the Finals again, and I’m sure that not a lot of people want to see Lebron in the Finals once again.

I guess we will never know until next season if his team was to improve and make the playoffs.

The Eastern Conference has also improved since Lebron left it to go to the Western Conference and join the Lakers, which made each team in the East more competitive and gave more chances in that conference to make the playoffs. Teams such as the Brooklyn Nets and the Orlando Magic just clinched the playoffs which they haven’t done in a few years.

Both of those teams have improved drastically, and so has the rest of the Eastern Conference. This can make it a very interesting playoffs for both conferences.

This can be thanks to Lebron for switching conferences and also his team missing the playoffs this season, but all I know is that it can only be better for the NBA, at least for this season.