The Necessity of Funding Amidst the Notre Dame Fire

Are Funds a Waste or a Legitimate Undertaking? 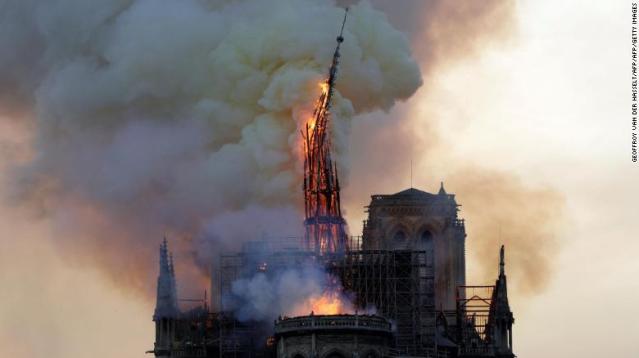 The photo above captures the burning of Notre Dame’s iconic spire. (Credit: CNN.com)

There are few events catastrophic enough to capture global attention. However, on April 15th of 2019, an event like this stormed the streets of Paris when a roaring fire burned through the Notre Dame Cathedral.

This catastrophic event captured the attention of citizens, newsroom employees and global leaders alike. People watched in awe as firemen made a valiant effort to stop the blaze roaring through the halls of the iconic gothic cathedral. Unfortunately, the spire and roof collapsed amidst the fire.

The structures that remained intact include the stone bell towers, the famed Great Organ, and the South Rose stained-glass window, which was donated by King St. Louis in 1260, along with several art pieces that were hastily transferred to the Louvre for safe keeping.

Investigators believe an electrical short-circuit in an elevator most likely caused the fire, but they are not certain. There may have also been a significant computer glitch that alerted authorities of danger in the complete opposite wing of the cathedral. According to CBS, clergy member, Patrick Chauvet, said although they do not know the exact origin of the fire, “we may find out what happened in two or three months.”

While the cause of the fire remains obscured, there is one thing French official know for certain: there will be an active effort to rebuild. The French government has already established a special office to handle the donation money. So far, about $995 million has been donated by French business leaders and the public. Other investors include notable fashion, beauty, and tech moguls.

As far as American companies are concerned, several have already promised to donate to reconstruction. For example, Alex Cook, chief executive of Apple recently tweeted “We [Apple] are heartbroken for the French people and those around the world for whom Notre Dame is a symbol of hope. . . Apple will be donating to the rebuilding efforts to help restore Notre Dame’s precious heritage for future.”

In total, nearly a billion U.S dollars have been collected in the name of rebuilding Notre Dame.

This hasty gathering of funds proves that the billionaires and millionaires of the world could easily solve chronic social problems if they wanted to. Over the past few years, America has neglected several social ills, like the crumbling infrastructure of Puerto Rico post-hurricane or the failing water systems of Flint Michigan. Although these problems clearly need to be addressed, the wealthy are funneling their money into a project that does not actually benefit the average working class citizen.

While the cathedral of Notre Dame is an important part of French history and French heritage, the multi-million dollar project to reconstruct it is not the best use of funds.

Instead, the money could be used to solve various social problems, like those previously mentioned or even the growing economic inequality in France. According to The Mercury News, Philippe Martinez, head of the CGT trade union put it, “If they can give tens of millions to rebuild Notre-Dame, then they should stop telling us there is no money to help with the social emergency.”

Historically, the multi-millionaires of the world have been more concerned with symbolic, grandiose projects rather than the wellbeing of working class people. The scramble to fund Notre Dame’s reconstruction clearly exemplifies the flawed values of the rich and of society as a whole.