All content, unless otherwise stated, is copyright of The Banner Newspaper. All rights reserved.
Humans of CSI

Working With Asbestos to get a Degree

Severe Health Problems Could be the Consequence of Furthering Education 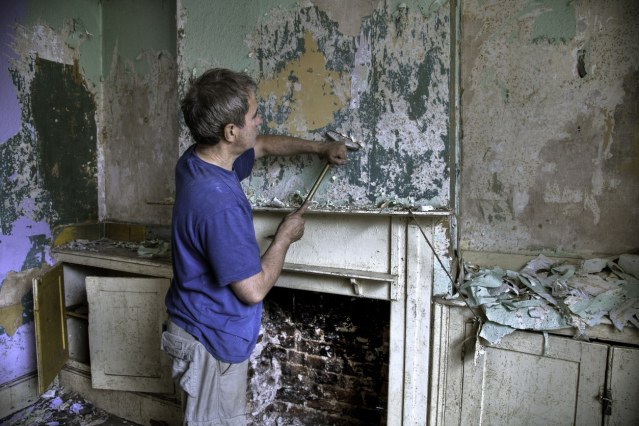 A man painting a wall while being exposed to Asbestos. Credit: hshlawyers.com

Like any other college student, Patrick Tabor works to pay his tuition and student loans. It just happens that his college job can seriously impact his health as he gets older and he is very much aware of it.

“I see guys who wear thin paper masks or no mask at all,” said Tabor, “I wear a big painter’s mask with big air filters on the sides.”

No hard labor job is easy or necessarily safe but a physically demanding job that also requires the removal of dangerous chemicals such as asbestos adds just one more thing on a long list of things to worry about in this business. Tabor’s main role at his work is to remove sealed bags of asbestos to quarantined areas for the bags to be secured, transported, and then disposed of properly.

According to the Occupational Safety and Health Administration or OSHA, asbestos is the name given to a group of naturally occurring minerals that are resistant to heat and corrosion. Breathing asbestos fibers can cause a buildup of scar-like tissue in the lungs called asbestosis and result in loss of lung function that often progresses to disability and death. Asbestos also causes lung cancer and other diseases.

The World Health Organization estimates that 107,000 people die every year from occupational asbestos exposure. A more staggering number, however, is the suicide rate, a 2015 CDC report placing the rate at 53 suicides per 100,000 men which is four times larger than the overall suicide rate.

“People don’t understand the struggle and the grind that comes with a job like this,” said Tabor, “I’m 28 years old and can not get the bags under my eyes to go away, but it’s inevitable. There are people all around the business that are around forty years old and they look like they’re sixty.”

Jobs in the construction industry come with high levels of stress that stem from many different things. Deadlines are often tight and owners of companies are often extremely demanding because the more days that a job is open the less money the owner of a company will earn.

Owners of private companies pay per man, per day from a payroll standpoint, which means that the more days a worksite is open, an owner has to pay men to be at that job which hurts in overall profits when the job is fully complete.

Stress also comes in the form of replaceability, one of the plusses of a job involving a trade is that the skills you need to be successful and productive do not take long to pick up. On the other hand, this makes all trade workers replaceable to an extent.

If you do not want to do your job or you physically can not do your job the company or union you belong to just sends someone different in your place.

To wake up in the darkness every morning and go to a job that takes a large physical and mental toll on you is difficult enough, Tabor, however, does so while not just attending classes but while trying to be successful enough in those classes to secure a job after graduating from CSI.

In some twisted quicksand-like way the construction industry grips onto young men who take jobs because it is what their father does or because they need the money and it holds them hostage if they can not get out quick enough.

“My friends and my girlfriend constantly tell me to quit because I hate it so much,” said Tabor, “But it beats delivering pizza any day for me.”