Leaders In The Law Panel Paves Way For Students

Panel of Four Provides A Crash Course On The Beginnings 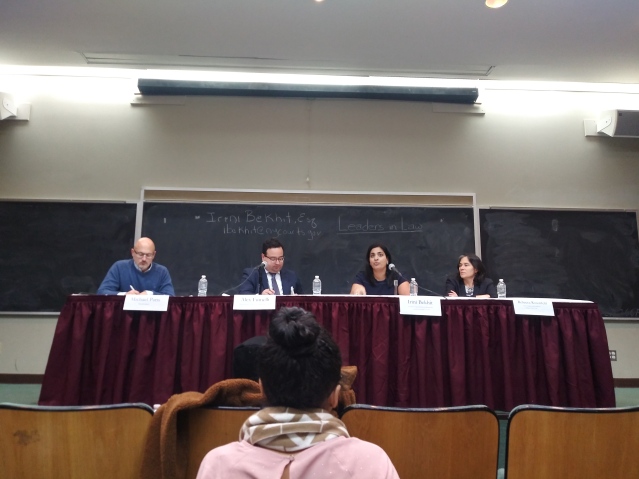 As a student in his senior year hoping to get his feet wet in just about anything that CSI has to offer, the Leaders In Law Panel was an event that I did not consider immediately.

However, after reading the mass-email, I was intrigued. As someone considering to join the Pre-Law Society next semester, I marked the email as important and asked others about it.

Being an outsider to events here at the college, nothing sounded too elaborate or fancy. But at the end of it all, I was glad that I went.

Hosted by the Pre-Law Society as well as being cosponsored by the Legal Studies Institute, the panel was moderated and commandeered by Mr. Michael Paris and featured Alex Fumelli, Irini Bekhit and Rebecca Rosenfeld.

With a rather star studded panel, Mr. Paris directs CSI’s Legal Studies Institute among other things. Mr. Fumelli is an Assistant District Attorney for Richmond County. Ms. Bekhit is an Associate Court Attorney at Richmond County Surrogate’s Court. Last but certainly not least, Ms. Rosenfeld is a staff attorney at the Legal Aid Society of New York.

Not only did these prolific guests talk about what they do and why they do what they do, but they also made the prospect known of answering any and all questions that came their way later on.

There were questions that would help any student who is thinking about getting into law find their way. The LSAT. The Bar Exam. Tuition for law school. The environment within law school. If you can still have a social life while you’re in law school. What made you gather an interest in law in the first place.

Answers that showed a genuine interest in the next generation. Fumelli told the crowd that even though he studied harder when he took the LSAT for the second time, he still got the same score. Bekhit told all of those in attendance that hopefully when she reaches 10 years of service, she could receive law school loan forgiveness.

Fumelli jokingly told the crowd that since he found himself free on Fridays, he would stare at a sculpture for hours on end outside of the law school he was attending. Bekhit said that she garnered a love for the field from her father as well as from the hit show, The Practice.

As well as talking in personal terms, the guests of honor did not even try to cut corners when talking about the hardships concerning the subject.

Fumelli and Rosenfeld both agreed that first year law students are always competing with each other in some way to see who knows more and thus, who will achieve more in the long run. Rosenfeld also hit the point home when she gave a theoretical statistic about what it should be like inside of a law school student. 1% inspiration and 99% motivation.

All in all, I came out of the Leaders In Law Panel Event with a lot more information than what I went in with.

The guests were personal, but yet professional at the same time, giving all of those who took time out of their college schedules important information that could help them find out if this is a profession that they would seriously consider looking into.