As the Pendulum Swings

The Upcoming Federal Elections and Their Implications Moving Forward 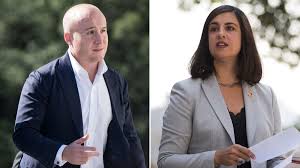 Whether you consider yourself a history buff or not, when discussing some of the most influential times in human history, it begs us to ask the question, what was it really like to be alive during that period?

Good times and bad, world wars and cultural renaissance, you must ask yourself what it was like to see the events that would shape the world for centuries to come.

We currently live in one of those eras. You can call it the technological renaissance, the age of misinformation, or the Cold War 2.0: Re-heated tensions (that one’s my favorite).

Whatever you call it, make sure you don’t let it pass you by without participating, and making sure the tomorrow we see is the one you fought for.

Now, I know a lot of people are convinced that their vote is unimportant or that because we live in New York “it’s probably going to go blue anyway.” I’m sure we’ve all heard that one at some point.

Depending on what district you live in, that could very well be true. Not for us Staten Island residents, however.

New York’s 11th Congressional district encompasses all of Staten Island and a small section of Brooklyn just across the bay from us. Currently the seat is held by freshman Democrat Max Rose, elected back in 2018 with just 52.5% of the vote.

After Congressman Rose’s recent vote to impeach President Trump, his seat is now under heavy fire from establishment Republicans.

Assemblywoman Nicole Malliotakis has announced her campaign to challenge Congressman Rose and right out of the gate she is receiving some pretty big endorsements. President Trump has already tweeted his endorsement for Malliotakis, knowing full well it is his best shot to take back the district he won by 10 points during the 2016 election.

Now I’m positive that most people aren’t political junkies like myself and it’s arguably for good reasons. Sometimes, there happens to be so much going on it is easy to miss some things along the way, and even easier to tune out altogether.

For those who have done either of the two, here’s a brief summary of the events that unfolded at the impeachment trial.

President Trump had been charged with abuse of power, obstructing Congress, and other high crimes and misdemeanors. The evidence seems to suggest that Trump froze federally approved aid destined for Ukraine in exchange for a political favor.

The release of a report detailed the possible corruption of his most prominent opponent for re-election at the time, Joe Biden.

Now the legality of the matter is something that scholars and academics will argue over for some foreseeable time. Whether or not you agree with what the president has done, his own party seems to acknowledge it was wrong on a legal level and possibly a moral level, but not worth the removal of the president.

To use their own words, Representatives like Susan Collins (R-ME) and others seem to believe he “learned his lesson.”

The controversial call with the president of Ukraine took place on July 25, one day after Robert Mueller testified on TV and casted extreme doubt on the highly anticipated Mueller report.

Mueller testified that the president was not exonerated and there was a lot of disturbing behavior that Trump would have to answer for, but he kicked the responsibility of holding Trump accountable to Congress and the Senate.

Trump then has the call arranged with President Zelensky and begins to see just how far he can push the bounds of the Constitution. Republicans will not vote to convict Trump.

With this new level of vindication, it can only be speculated what Trump will allow in this upcoming election. With his sights clearly set on those that can help him, Trump will spare no expense to make sure he stays in office this November.

The outcome of this election may very well affect the future of the free world. It is not often that we are offered the chance to participate in one of the most influential decisions in modern history.