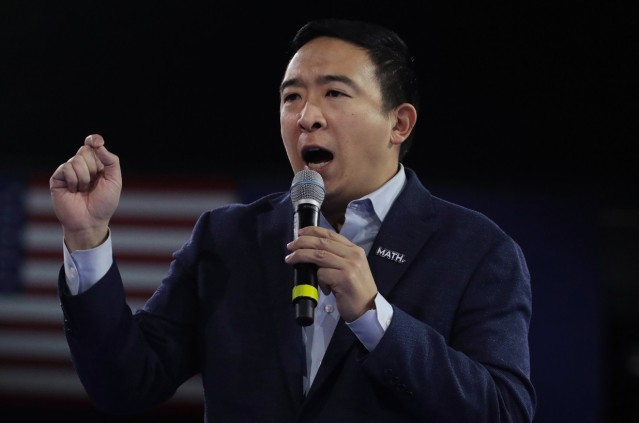 Andrew Yang steps down after the New Hampshire numbers show him the race is unwinnable. Credit: nypost.com

Andrew Yang, attorney, entrepreneur, and Democratic candidate filed to run for President with the Federal Election Commission on November 6, 2017. His campaign was a response to his fear of the alarming rate at which automation was creating economic instability in the United States.

Shortly after the results of the New Hampshire primary went live, Yang announced that he would be suspending his campaign.

Yang centered his debate points around universal basic income, the increasing threat of climate change, and the discussion of what he called the “fourth-industrial revolution,” a national topic that was largely spearheaded by his campaign.

“I looked at the numbers, I did the math around what happened to many of the manufacturing workers in the Midwest that, in my view, ended up electing Donald Trump,” said Yang in an interview with Trevor Noah on The Daily Show.

“And the trends that affected those communities are now going to affect retail workers, which is the number one job in the United States. It’s going to start hitting truck drivers in the next number of years, and driving a truck is the most common job in 29 states.”

According to Yang, Amazon has closed 30% of American stores and malls while paying zero in taxes, setting a precedent for the worth of Jeff Bezos’ $134.5 billion corporation.

Because of this, the Freedom Dividend became Yang’s answer to the situation that Americans currently face: setting up an infrastructure where people get a sizable amount of every Amazon sale, every Google search, every robot truck mile, and putting a dividend of $1,000 into American’s hands each month.

“I spent seven years running a nonprofit that I’d started that helped create jobs in the Midwest and the South primarily, helped create several thousand jobs,” Yang said in an interview with NPR.

“I saw that we are in the midst of the greatest economic transformation in our country’s history. I’m convinced that Donald Trump won in 2016 because of the early waves of the fourth industrial revolution, where we automated away four million manufacturing jobs in Michigan, Ohio, Pennsylvania, Wisconsin, Iowa – all the swing states he needed to win.”

“If we do nothing, we are going to be in for much worse than Donald Trump’s election unfortunately.”

Instead, he believes many startups and organizations would have access to more resources if every American received an additional $1000 a month which would stimulate creativity and entrepreneurship.

His own entrepreneurial background comes from various start-ups during the period known as the “dot-com bubble,” or Internet bubble, where the United States exponentially adopted and invested in the usage of the Internet.

Yang has been at the forefront of several businesses, namely his own foundation, Venture for America. This nonprofit organization has created jobs in many cities after the Great Recession.

Yang was able get his thoughts and proposals into the mainstream and is credited for elevating those discussions to the national level. He was an engaging candidate for Asian-Americans and people of color throughout his run.

“This wave is just beginning and will continue to build and grow until we rewrite the rules of this economy to work for us, the people of this country,” Yang said in his final candidacy address.