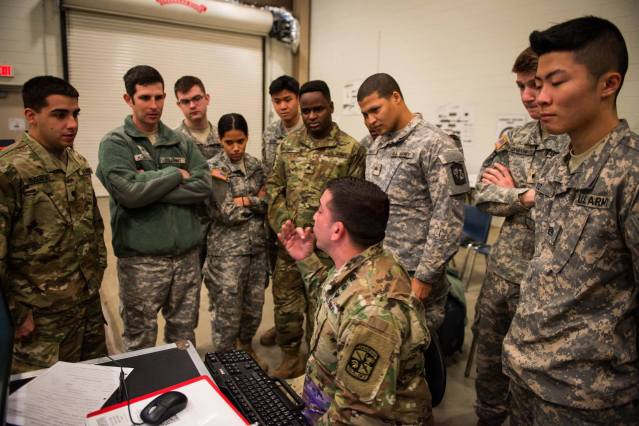 Staten Island has a population of over 800 veterans, not including their family members, some of which have the desire to follow their family’s footsteps and serve their country as a military officer. Unfortunately, this dream is not a reality, due to the high cost of a college education.

ROTC seeks to educate and equip leaders with essential skills such as critical thinking, communication, and planning. Military Science courses teach leadership as a deliberate, continuous, sequential, and progressive process to develop confident, competent, and adaptive leaders with a basic understanding of military decision-making.

The ROTC consists of eight 3-credit courses of Military Science taken in sequence and a course in military history. There was a town hall meeting establishing whether it should have an ROTC in the College of Staten Island.

Back on September 24th, 2013, faculty, staff, students and parents that came from all over CUNY, got together in CSI for a town hall meeting to discuss whether there should be an ROTC program implemented within the College of Staten Island as a regular curriculum. The panel consisted of six people where both sides were for and against implementing the idea of ROTC.

Both sides had their viewpoint on the programs.

It was known that there wasn’t an ROTC program on any campus of CUNY for almost fifty years. An idea to change that came up when the members of the CUNY administration brought it up, due to the right-wing American Enterprise Institute appearing to account for ROTC’s implementation throughout CUNY such as City College, John Jay, Medgar Evars and York College.

Two of the members of the panels opposed to ROTC were veterans, even members of the audience, who were not in the panel, however, who had experience in the army also spoke out against ROTC.

Some spoke for the implementation of ROTC, where there was an argument about where the Army wanted to establish more ROTC in the northeast. An Officer from the Army stated that, “you get upward career mobility, you get competitive skills for the future, and you’re equipped to succeed in life.”

Students in ROTC would be able to receive a scholarship and stipends. It’s important to note that there would be no guaranteed commitments until after two years of enlisting in the ROTC curriculum. Students who graduate from ROTC are guaranteed a position as second lieutenants in the US Army.

Students from CSI at the time spoke for this program and that plan on going to the navy, agreed with points made during the town hall meeting. A student from the CSI at the time, Siobhan Murphy, said her experience in JROTC, Junior Reserve Officers Training Corps, a subprogram of ROTC in high school, gave her confidence and structure in her life.

There was a debate in York College where there was skepticism and pushback on ROTC’s training and actual program itself. However, the doubt seemed to have faded away over time after the program was constructed within the College.

Now there will be another town hall meeting to discuss the idea further, with new faculty, new students, and a new environment. Now that CUNY has gone through a fiscal decline and CSI enrollment rate has gone down there might be a new stand on this idea.

On March 24th, in 1P Williamson Theatre, during club hours there will be a second Town Hall meeting over whether an ROTC should be implemented within and discuss if there is proper support.