$15 Minimum Wage is the Future 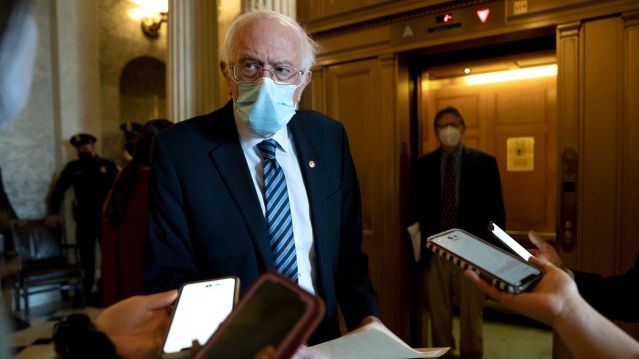 Today, budget chairman Bernie Sanders decided to listen to his constituency and the majority of American people to force a vote on the $15 minimum wage.

8 democrats came on the record to show their opposition to the $15 minimum wage, including Senator Krysten Sinema who has received the most criticism, due to her hand gestures that were done during the subject in matter.

She alongside other democratic Senators had voted against this amendment to the $1.9 Trillion stimulus bill.

The minimum wage would be about $25 an hour if you accounted for productivity, this means Americans are working more hours even though the wages have been stagnant since the 1980s.

According to The Organization for Economic Co-operation and Development, the United States has the lowest minimum wage to average wage ratio out of all OECD countries, showing the US to be far behind on the issue of making the minimum wage a living wage.

The minimum wage in this country is not a livable wage, according to the National Low Income Housing Coalition, there is not a single state where you can rent a two-bedroom apartment and not spend more than 30% of your income on rent while working 40 hours (full time) a week on minimum wage.

They also discovered that there are only 12 counties in the United States where a full-time minimum wage worker can rent an one-bedroom apartment and not spend more than 30% of their income on rent.

24 million Americans would be positively affected by this, seeing their wages grow overtime for the first time in decades, making the minimum wage a living wage.

Raising the minimum wage would also have people less reliant on the government in some ways, the Economic Policy Institute did a recent study where they concluded that up to $31 billion would be saved from public assistance programs if we were to raise the minimum wage.

These 8 Senators are voting against a $15 minimum wage because they’re “moderate” and do not want to alienate less progressive voters.

According to Data for Progress, 66 percent of Americans agree with the $15 minimum wage, even 48% of republican voters agree with this while 48% do not.

Senator Joe Manchin’s own state also strongly believes in a $15 minimum wage raise and  One Fair Wage Coalition conducted a poll and discovered 63% of West Virginians support a $15 Minimum Wage.

There’s even more empirical evidence of this; Florida voted for Trump by a larger margin than they did in 2016, yet a $15 Minimum Wage Direct Ballot Initiative passed by 10% with those same voters.

Krysten Sinema’s state has a Minimum Wage of $12 and apparently that is too much for her even though her fellow Senator Mark Kelly of the same state voted for it.

The Congressional Budget Office is a source that is often cited by many of these Corporate Media Outlets and Right-Wing Networks.They state that 1 million people would be lifted out of poverty but 1.4 million jobs would be lost.

Other industrialized countries have higher minimum wages than we do, Australia has the equivalent of a $15 minimum wage in US Dollars and has similar unemployment rates, around 6% in January 2021.

Unemployment is also an often overused statistic, job availability is important but if those employers are unable to pay their workers a living wage, they should consider not running a business.

That does not mean that the government should give subsidies or tax breaks for small businesses, 60% of them have shut down and deserve as much aid as possible.

President Joe Biden has an average approval rating of 53% and considering how partisan the country has become, it’s possible he’ll never reach an approval rating that high for a long time, perhaps ever.

He believes in a $15 Minimum wage, one of the few promises that Biden made to Bernie and his wing of the Democratic Party.

Yet, despite being incredibly popular at the moment alongside covid relief polling at 75% in some polls, he is not utilizing the bully pulpit and pushing for a living wage.

A $15 minimum wage is not only correct morally and economically, it is the popular decision that would help Democrats electorally.