With Excellent Visuals, Gameplay, and Plot “Horizon Zero Dawn” is a Must Have This Season 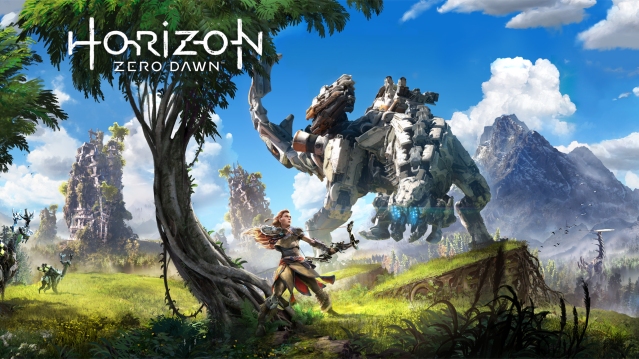 “Horizon Zero Dawn,” one of the latest exclusives to release on Playstation 4, has made waves since its February 28 release.

Published by Sony Interactive Entertainment and Developed by Guerrilla Games, “Horizon Zero Dawn” takes players far into a future where the world is no longer as we knew it.

Great feats of engineering and technology have been reclaimed by the earth, degraded by the elements and turned to rubble.

Humanity has transitioned to various hunter-gatherer tribes, forming enclaves and utilizing materials gained from hunting various species of machines that roam the land.

Players take the role of Aloy, an outcast from birth, on her quest to protect the lands from which she was never wanted, and unravel the hidden truths of the world – and herself.

Horizon Zero Dawn is a beautiful game, with stunning visuals and environments that make every area feel unique.

Horizon nails this point, providing environments that are varied and transition seamlessly into each other, drastically increasing player immersion.

The attention to environmental detail and map design has a drastic effect on the overall feel of the game.

As the majority of play time is spent roaming about these wild areas, hunting enemies and completing quests, uninteresting environments would quickly lead to an uninteresting game. A potential issue that Guerilla clearly took into account when designing the map, and was avoided with great success.

The game’s core elements are exploration and combat, working hand in hand to create some truly interesting gameplay patterns.

While Horizon does incorporate human enemies, the most prevalent threat are the various machines that roam freely on the map. Most of the machines’ designs are based on various animals, both modern and prehistoric. For instance, “Striders” are essentially robot horses, while “Sawtooths” resemble giant Saber-Toothed Tigers.

The former are a passive species that will ignore Aloy unless provoked, while the latter are inclined to attack on site. Each species has it’s own behavior, purpose, and exploitable weaknesses.

A common downfall of open world games is the variability of player progression. Since the player chooses where they go and when, there is potential for a player to become too strong too soon, outpacing the game and making large sections trivial.

Horizon’s solution is a two pronged approach, with player levels giving smaller benefits and enemy machines remaining exactly as threatening as they appear.

These two aspects make every fight tense and engaging, forcing the player to use every tool available to defeat the enemy. As the game progresses, proper preparation becomes increasingly important, with a player’s creativity in handling an engagement being more useful than Aloy’s raw power.

Though these mechanics can cause some fights to be incredibly difficult, the pain is easily alleviated by the option to change the difficulty level at any time without penalty. A much welcome option for those wanting to experiment with what difficulty is best for them.

Unfortunately, many of “Horizon Zero Dawn’s” strengths are weaknesses as well. In addition to various gameplay glitches like out of sync character models or falling through the map, there are many points where the game feels like a blend of previous successful open world games.

While at the surface this does not appear to be too much of an issue since the gameplay elements Horizon adopts are executed well, it does bring forth feelings of missed opportunities.

Instances where the game could have done something completely new and interesting are instead the tried and true methods used in veteran series such as “Fallout,” “Farcry,” and “The Witcher.”

It is these shortcomings that hold Horizon back from being the genre-defining game it could have been, but when even a game’s worst aspects don’t detract from its excellence, it is clearly something special.

Horizon Zero Dawn is a must have, a near perfect open world game that will have players enraptured for hours on end, hunting for survival and untold secrets buried in metal.