This LGBTQ Culture is Going Mainstream 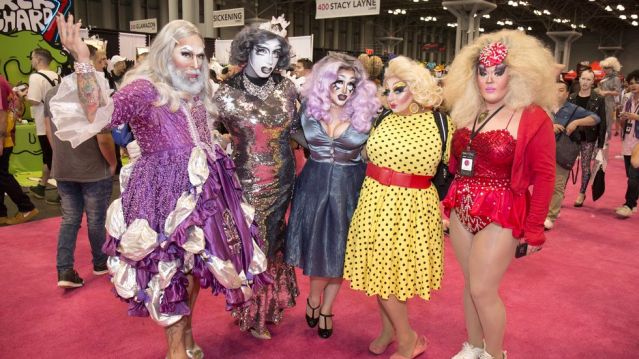 Drag queens, celebrities and social media personalities galore were found on September 9-10 at Rupaul’s DragCon NYC in the Javits Center.

Usually taking place in the west coast, DragCon finally made it’s debut in NYC. Hosted by the iconic Rupaul, DragCon is a convention where fans can meet their favorite drag queens, buy merch, sit down for panels and watch the entertainers hit the runway.

Thousands were in attendance at the convention in all shapes, sizes, colors and drag.

Bleeding Cool says DragCon “Tripled its attendance since 2015” showing how New York goes all out.

Lines for panels were extravagant with 1-4 hour waits and the Q&A’s were even greater.

Many personalities from the LGBTQ+ community like Connor Franta, Nico Torturella, Todrick Hall and many more made appearances.

Also followers attended to see their social media icons like Joanne The Scammer who appeared on the runway and had a Q&A.

A major attraction was YouTube MUA Jeffree Star’s panel for his makeup line Jeffree Star Cosmetics, whose line was crowded with his subscribers, fans, other beauty gurus and MUAs on line to buy his makeup and walk his pink carpet.

The line took up a big chunk of the center with people lined up since the beginning of the convention.

New Yorkers came in their best clothes, Drag and cosplay. Fans drove from upstate and some even flew out to New York to attend.

Guests came to see the queens from Rupaul’s Drag Race. From former seasons, winners, All Stars fans got a chance to be in the ambiance of their favorite queen’s glamour.

Panels of each queen were selling merch like clothes, pins, photos and even make-up collaborations.

A downside was some queens gave out spending limits or charged for a meeting and autograph.

Shea Coulee, a season 9 veteran, charged either $60 for a meet and greet or $50 for merchandise, which was pricey.

Sasha Velour, however, the winner of season 9, charged $10 for a photo card and autograph, a meet and greet, or a professional photo.

To attend DragCon, there was a selection of tickets. Single day, weekend passes and VIP were sold.

There was a lot of attractions and Q&A’s to attend and with the lines making it hard, a weekend pass is recommended to get a fulfilling experience.

To bring DragCon away from its regular location to go cross-country, shows how mainstream LGBTQ+ culture can get.

Rupaul’s DragCon NYC is a step forward to acceptance and comfortability for the LGBTQ+ community.

Regular DragCon fans were attending their 3rd year of DragCon with some saying it’s getting “Bigger and better each year”. It is definitely a sight to attend or return to.

With its greatest turnout yet, it goes to show just how it’s always done with a bang, especially in New York City.