Commentary: Deflector-in-Chief Does What He Does Best 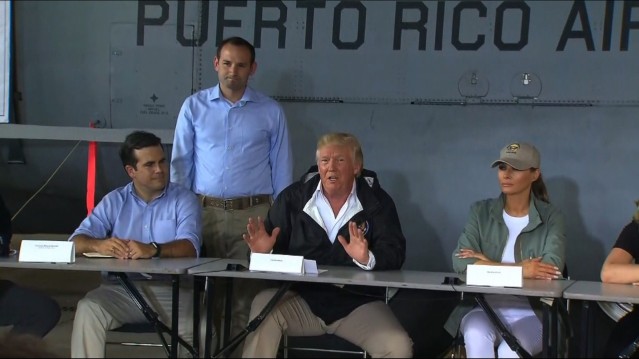 On September 20, Puerto Rico was rocked by Hurricane Maria, a category four hurricane, two weeks after Hurricane Irma went through and damaged the island. The total cost of damage by Maria was roughly $50 billion.

Once again, President Trump stole the spotlight, this time, from what had happened in Puerto Rico, by diverting and complaining about Colin Kaepernick and other NFL players protesting the national anthem, during a campaign rally in Alabama.

This is what the President said about the national anthem protests in the NFL, at the Alabama rally: “Wouldn’t you love to see one of these NFL owners, when somebody disrespects our flag, to say, ‘Get that son of a bitch off the field right now, out, he’s fired. He’s fired.’ You know, some owner is going to do that. He’s going to say, ‘That guy that disrespects our flag, he’s fired.’ And that owner, they don’t know it [but] they’ll be the most popular person in this country.”

Yet, the people of Puerto Rico and U.S. Virgin Islands are fighting for their lives each day, struggling to survive. Several of Puerto Rico’s mayors are describing the situation as “apocalyptic”.

This certainly isn’t the first time President Trump has deflected attention on matters.

In a debate with Hillary Clinton, he deflected questions about his lewd comments about women on Entertainment Tonight.

Back in April, Trump deflected questions about the Russian investigation and claimed that this is a “crooked scheme against us” by former President Obama.

In March, Trump, in a joint press conference with German Chancellor Angela Merkel, deflected questions about an accusation he made on twitter that President Obama wire tapped Trump Tower “before the victory”, saying to ask Andrew Napolitano, a judicial analyst with FOX News who stated that three sources confirmed with him that President Obama did wiretap Trump Tower.

In February, after a failed raid in Yemen, President Trump deflected blame and responsibility, praising his generals but yet blaming them for losing William Ryan Owens, the Navy SEAL who died during the raid.

The list goes on with numerous situations where President Trump deflected blame, criticism and responsibility.

There is a motive behind his deflections. The clearest example is what is going on now with Puerto Rico, the US Virgin Islands and the NFL protests.

Recently, the Mayor of San Juan, Carmen Yulin Cruz Soto, criticized the response effort by Washington by pleading to “save us from dying” in a press conference on September 29.

Response efforts, however, have been slow by the White House. It took several days for the President to waive the Jones Act, a century-old shipping law, that was delaying and complicating further relief efforts for Puerto Rico and the US Virgin Islands.

The deflections from the President is nothing new nor is it coincidental.

It is, however, a powerful tool that the President uses to his advantage to make people talk about anything else but what’s really going on.