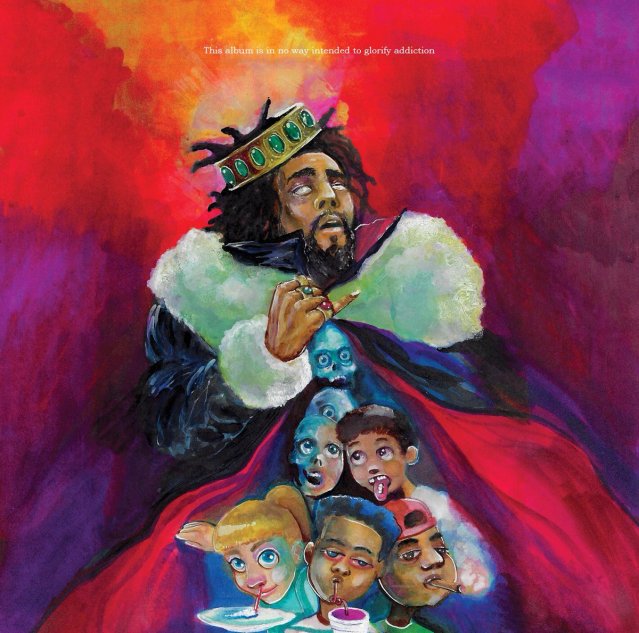 After concluding that he would have a higher chance of landing a contract for a record label in New York City, he chose to attend St. John’s University after high school and move up north.

In 2007, the same year that he graduated from St. John’s University with a 3.8 GPA, he was recognized as a rapper after the release of his first mixtape titled “The Come Up”. With strong intentions of continuing this path, in 2009 he released two more mixtapes after signing under Jay-Z’s Roc Nation company. Two years later in 2011, he released his first studio album titled “Cole World: The Sideline Story.”

Just recently, on April 20, 2018, he released his latest album titled “KOD” with a total of 12 songs. J.Cole states that this acronym has 3 meanings behind it — kids on drugs, king overdosed, and kill our demons. Though J.Cole gives his fans the meanings of his new album title, he leaves the rest of his album for the fans to interpret, including why he chose these three meanings.

J.Cole, known for going double platinum without featured artists, introduces a new feature artist on “KOD” who goes by the name of kiLL edward.

kiLL edward is an unknown or even anonymous artist. The only time he has appeared anywhere is on “KOD”, and doesn’t seem to have music of his own.

This raised suspicion in the fans that this just might be J.Cole since it sounds like him in a deeper tone.

J.Cole recently confirmed that this is, in fact, true.

Cole stated that this somewhat evil alter-ego he created was inspired by his stepfather named Edward.

The reason Cole created this alter-ego was because his stepfather and biological mother separated in 2013. This separation led his mother, Kay, to do drugs and drink alcohol.

In his song “Window Pain (Outro)”, he raps that “all he wants to do is kill the man that made [his] mama cry.” Thus, we start to get the sense that this alter-ego embodies his darker, more violent tendencies.

kiLL edward appears in two of J.Cole’s songs, “The Cut Off” and “FRIENDS.” Both of these songs discuss cutting off those who are close to you, and drug abuse/addiction.

Within the first 4 days of KOD’s release, Cole dropped two videos from his album as well.

The first video was released on April 20, 2018 (the same day of his album) for his song “ATM.” Assuming that the acronym for ATM is “Automated Teller Machine,” J.Cole creates a whole different meaning for the purpose of the song with his video.

That being said, Cole’s meaning is “Addicted to Money.” The song, along with the video, speaks about how money is a necessity in life. He goes on to hint that money could be a type of “drug,” because of its addictive quality.

Cole spits the line, “Can’t take it when you die, but you can’t live without it.” The video is clearly all about drugs and money, and it is easy to see that throughout the video, J.Cole carelessly spends money on addictive things (such as gambling and drugs) and ends up paying for a car with his arm and leg — quite literally.

The second video that Cole released 4 days after the album release and the “ATM” video, was the video for his song “Kevin’s Heart.”

Surprisingly, the actor/comedian Kevin Hart actually stars in this video. The title, the lyrics, and even the video all refer to Hart’s cheating scandal against his wife and child.

The video shows Hart walking around in public and drawing disgusted stares from various people. During this women will “flirt” with him through facial expressions, and he will politely wave and/or decline.

With onlookers seeing this, they give him dirty looks, assuming he is flirting back. This song doesn’t only refer to Hart, though. Cole might also be hinting at his own issues with cheating on his wife while addressing a bigger theme of man’s cheating tendencies as an addiction.

J.Cole also has a track titled “KOD”, the same title as his album. This is one of the more popular songs off of his album.

In the first verse of this track, Cole is addressing his competitions, telling them to back off after they question why he doesn’t include features on his albums.

The second verse addresses himself when he was younger, and how he started to get involved with the wrong crowd and got into using drugs. Listening closely this track also includes the voice of kiLL edward during the second verse when he begins to actively use the drugs as if to foreshadow the character of kiLL edward.

At the end of this track, they list a few of the most addictive drugs. The last one they list is supposed to be the strongest, most powerful drug — love.

The third track of “KOD” is titled “Photograph.” This track talks about a different type of addiction, that being the internet. In this, Cole talks about how he found a picture of this girl on social media and hopes to be with her and get to know her.

One line that exquisitely sums up this track is “Love today’s gone digital, and it’s messing with my health.” This one line describes how social media and the internet has become this new type of drug that many people are incapable of living without, and how it carries the ability to ruin society.

The last track on this album is called “1985 – Intro to ‘The Fall Off.’” The spoiler is in its title — this track is the intro to J.Cole’s next album called “The Fall Off”.

In this track, he talks about his successful career is and how he’s flourishing as a rapper. He discusses the disses that he’s received from other rappers and how they’re irrelevant to him, but under the same breath, he wants them to realize and learn from their youth and reckless experiences, just as he had.

Rumor has it that in this track he is speaking directly to rapper Lil’ Pump, as a message to all young rappers of his kind. This track shows how Cole has matured throughout his career, and how he is going to continue this pace.

J.Cole debuted “KOD” at No. 1, making it the largest opening week of 2018, so far. The album has been extremely successful considering it was announced less than a week before its release without a single promotion.