The Yankees’ Odds For Playoff Success

Insight Into A Possible Bright Future for The Yankees 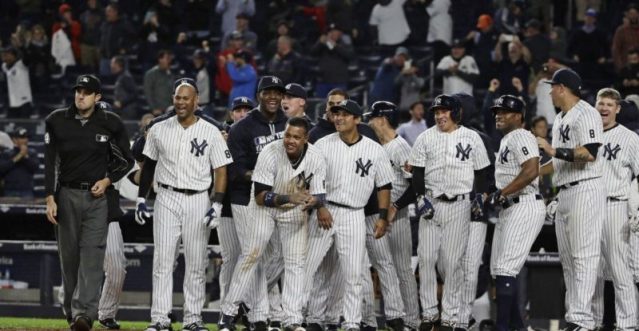 The New York Yankees are predicted to be successful in their new era. Photo Credit: deadhitsports.com

The New York Yankees have entered a new era in 2018 since Joe Girardi, their manager of the past 10 seasons, is now gone.

Currently, in his place is Aaron Boone, best known for his walk off home run in 2003 that sent the Yankees to the World Series that year.

This surprised many fans as the Yankees were one game away from going to the World Series last year. Now, there is a new Yankees team.

Giancarlo Stanton came in a trade with the Miami Marlins for Starlin Castro and two of the Yankees’ top prospects have made the jump to the Major Leagues: Gleyber Torres and Miguel Andujar.

The 2018 season will be the 26th straight season where the Yankees finish with a winning record.

And once again, they are playoff bound, heading to the American League Wild Card Game for the second straight year and once again hosting it in Yankees Stadium.

They will either be playing the Oakland Athletics or the Houston Astros, depending on who wins the AL West.

If the Astros win, then the Yankees will have an easier time facing the A’s in the Wild Card Game.

If the A’s win, then the Yankees’ season will come to an end against the Houston Astros.

The Astros have ended the Yankee’s season in their last two postseason appearances- first in the 2015 Wild Card Game, and last season in the ALCS en route to the World Series.

The Astros have gotten the better of the Yankees over the past few years, and will continue to do so despite the Yankees getting better at winning games against them.

In a recent “Ask Me Anything” on Reddit, Ben Reiter, who wrote the Sports Illustrated cover story predicting the Astros would win the World Series last year, as well as the book “Astroball: The New Way to Win it All,” predicts that the Yankees will win the World Series in 2021.

This makes sense for a couple of reasons.

First, these Yankees are too green.

Andujar, Stanton and Torres have not played in an MLB postseason game yet.

The second reason is that the Yankees need a few more years of seasoning before the players at the center of their future to reach their primes.

As for the Red Sox, the Yankees will most likely have to the face Red Sox in the Divisional Series if they win the Wild Card Game, seeing how they have the best record in the league.

And who has the second best record? The Yankees.

According to ESPN.com, the Yankees have struggled against the Red Sox this season, having a record of 5-8 against them.

The last time these two teams played, the Red Sox swept the Yankees in four games, including a come from behind walk off in extras to finish the sweep.

But the season is far from over, and the Yankees play the Red Sox two more times this season, including a three game series against them in Boston to finish the season.

If these results hold and the Yankees can win the AL Wild Card Game, then it would be the first time that these two times would meet in the Divisional Series.

The Yankees won the first two times, then the Red Sox won in 2004 after trailing in the series three games to none.

The future is bright for the Yankees, but it is all about meeting that potential and bringing their dreams of a 28th World Championship to reality.