Where Do We Draw the Line Between Internet Censorship and Freedom of Speech? 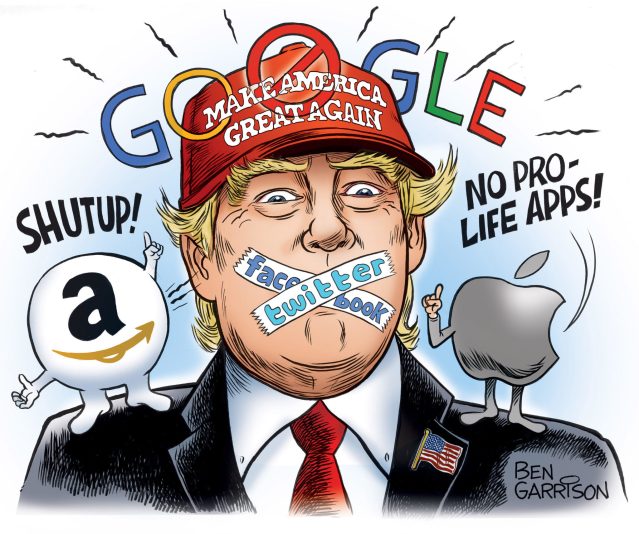 President Trump is just one of the many people raising concerns about Internet censorship.
Photo Credit: reddit.com

As the age of technology ushers in an era of free information, the political establishment faces new challenges in maintaining its hold on public opinion.

The Internet is a powerful tool for humanity and as larger portions of the population begin to gain access to it, we are discovering the many dangers that lie within its seemingly limitless depths.

Although social media grants most of its American users with an ability to voice themselves better than ever before, some Americans are feeling more restricted than ever due to what is now being viewed as Internet censorship.

There are practical applications for a technology which uses algorithms to organize web pages and create safe search results. However, many citizens feel as though these tools are being used to limit free speech.

The most accepted implementation of these algorithms is for children surfing the web. Most Americans will agree that we do not want our kids finding pornographic material while using internet search engines; this is why Google installed a safe search option.

With this being said, is Google doing more than just stopping kids from coming across inappropriate material?

Is Google stopping adults from seeing unfavorable political information? Many seem to think so. In the past few weeks, President Trump has been very vocal about this issue.

Last month, President Trump raised this issue when he tweeted, “Social Media Giants are silencing millions of people. Can’t do this, even if it means we must continue to hear Fake News like CNN, whose ratings have suffered gravely. People have to figure out what is real, and what is not, without censorship!”

Many other conservatives feel the same way. The president’s tweet was in response to many complaints from his supporters about being censored for their political views.

Trump even went on to say during a press conference, “I think Google is really taking advantage of a lot of people, I think that’s a very serious thing and it’s a very serious charge… I think that what others are doing, if you take a look at twitter and you take a look at facebook … They better be careful because you can’t do that to people … we’ve had thousands of complaints.”

Much of the fear causing Americans to view this act by the Silicon Valley Tech giants as an infringement on their rights arises from the idea that these internet media platforms are acting as public utilities thus, they should be required to protect free speech on both ends of the political spectrum.

However, there are many Americans who support the decision to censor certain speech, on the grounds that since these companies operate within the private sector they are well within their rights to remove whichever content they deem inappropriate.

Nonetheless, most Americans do seem to be united under the idea that federalizing these platforms is not the right approach to solving this issue.

Are these concerns irrational? America has maintained a worldwide reputation as the land of the free because of our Constitution’s Bill of Rights. Many other countries are not protected by the same freedoms which our Constitution grants.

In China, their social media giants are working with the government to enact what is known as a social credit score.

All of China’s citizens are monitored by tens of millions of AI equipped street cameras which track their behavior through the day and compare it with their online activity in order to create a unique score for each individual. This score determines how trustworthy a citizen is in the eyes of the government.

Although this system is a reality in China it is not in place in America and most Americans intend to keep it that way. This is why some Americans are already starting to question the amount of power these tech companies should posses.

Just like any powerful invention in human history the Internet should be used with discretion. But where does that discretion come from?

With the constant, exponential growth of technology, it is well within reason for Americans to be raising this conversation.

Would a social credit score do more harm than good? Do the tech giants have too much power? Can the average person do anything to protect their own privacy?

It seems Americans will be debating these concepts for some time to come.

Let’s just hope the country reaches a conclusion as to where all of this technology is bringing us before future generations are brought into a world where it’s too late to back out.