The Grave Outlook of The Genocide in Myanmar 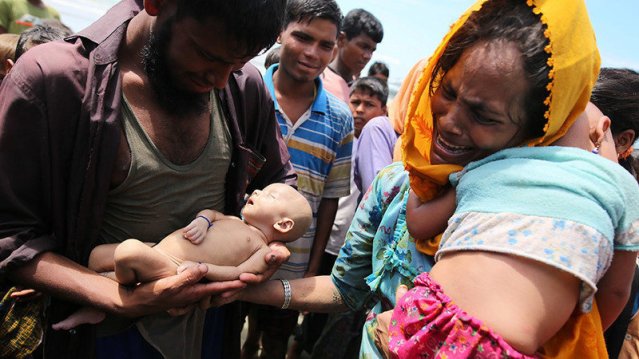 The Rohingya, a Muslim minority, continues to be dispelled from Myanmar. Photo Credit: change.org

While mainstream media outlets are heavily focused on President Trump and the Mueller investigation, they often forget that there is a whole world out there.

Unfortunately, there are genocides taking place in the world, where thousands are being deliberately killed every year.

A notable Southeast Asian country where genocide is taking place is Myanmar. Myanmar is made up of many ethnic groups, one of which is known as the Rohingya.

The Rohingya is a Muslim minority group that make up about 4% of Myanmar, whereas Buddhists make up around 87% of the population. Most Rohingya reside in the Rakhine province.

According to The New York Times, religious fundamentalists, ultranationalists, and even high officials in the military view the Rohingya as illegal immigrants. The Burmese government considers the Rohingya to be a threat to the common Buddhist identity.

This discrimination against the Rohingya isn’t new. In the past, the Burmese government has limited their access to citizenship and education.

The New York Times article also states that about 750,000 Rohingya Muslims were forced to leave their homes and immigrate to Bangladesh to avoid being killed by the Burmese military.

A recent United Nations report on Myanmar revealed that people are being burnt alive, raped, and killed. Landmines, which are banned under international law, are being used to trap or kill anybody trying to flee the Burmese army.

There have been waves of violence against the Rohingya fanned by hate speeches.

However, due to the fact that the military has so much power over the country, these military officials most likely won’t face justice in the current government.

The Burmese military has a great deal of power within the country. Since 1962, when General Ne Win took power through a military coup and formed a military junta, the military has played a significant role in the policy-making of Myanmar.

It wasn’t until recently that Myanmar started to shift from military rule to civilian rule. Nevertheless, the military still holds significant power.

The civilian government that is being established in Myanmar is too weak to stop the genocide. According to The Economist, Aung San Suu Kyi, Myanmar’s de facto civilian leader, has set up multiple committees to investigate the genocide.

However, these committees were powerless and insufficient in their investigation. In fact, the committees only managed to prosecute seven infantrymen who were responsible for a massacre.

According to Time magazine, a human rights organization called Fortify Rights states the Burmese military has “deliberately blocked the delivery of life-saving aid to civilians displaced by the civil war raging in Kachin and Shan states…  suggesting these actions violate international human rights law and should be prosecuted.”

Fortify Rights continues to accuse Myanmar’s military of blocking vital resources such as food, water, healthcare, and shelter from civilians that need them. They claim this could be an act of war crime.

The Burmese government has made obtaining a travel permit a difficult and time-consuming process, according to the Time article. Such actions prevent journalists and human rights activists from investigating the injustices of the country further.

With all of this going on in Myanmar, more nations around the world are taking notice. Most recently, the Canadian parliament has condemned the actions of Myanmar’s army and has deemed what is going on in the country an act of genocide.