Couples Costume Ideas to Snuggle Up to This Halloween 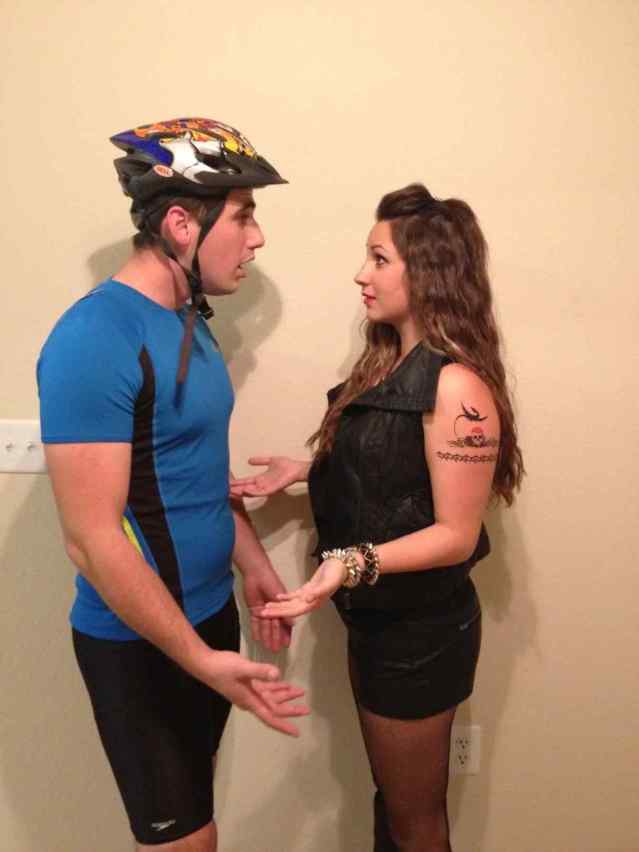 Halloween is almost here. And do you know what that means? Costumes and costume parties.

And for those coupled up, coming up with the perfect “couples costume” could be a daunting task.

Everybody knows that couple that comes to the party, dressed in the perfect couples costume. They saunter in dressed in togas or camouflage and make the single people feel just a little bit bad for themselves.

Those that are paired up feel as if their costume just doesn’t hold up. But good ideas are all around you, it’s just a matter of looking in the right spot.

Looking for something historical? Costumes such as Uncle Sam and the Statue of Liberty or Greek Gods or Goddesses might be an idea.

For Uncle Sam, It could be something as simple as red, white, and blue attire with an American flag top hat.

The Statue of Liberty could be just a green dress with a headband and a torch. This costumes are simple, but recognizable to all.

What could possibly be easier than a Greek God or Goddess? A white bed sheet tied around you and some props makes for an easy Poseidon or Aphrodite costume on a budget. Looking to go more vintage, not ancient?

An easy costume to pull off could be a duo of army soldiers, or an army soldier and Rosie the Riveter. Simple, sweet, but still an amazing costume.

Want something a little more magical? Easy, you can never go wrong with a Disney costume.

Whether it be dressing up as your favorite prince and princess duo or taking on the side characters, there is a plethora of options to choose from.

Some ideas include Rapunzel and Flynn Ryder from “Tangled”, Jessie and Woody from “Toy Story”, Lilo and Stitch from, well “Lilo and Stitch”, Tweedle-dee and Tweedle-dum from “Alice in Wonderland”, or even Mary Poppins and Bert from “Mary Poppins”.

Disney can give you tons of ideas, its just a matter of putting them to use. Want magical without utilizing the Disney empire? Try some Harry Potter costumes, a personal favorite is Dobby and his sock.

Or maybe something as simple as a dentist and the tooth fairy? A cute and fun costume so long as you remember to brush and floss after eating all of that halloween candy.

Not quite sold on the whole Disney idea? Have no fear, superman is here. Quite literally. Superheroes are a great couples costume idea because they almost always come in pairs of two.

Whether it be Batman and Robin, Poison Ivy and Harley Quinn, or Superman and Lois Lane. A set of Superhero costumes might just be the way to go for you.

The nice thing is you can easily find these costumes at any and all costume stores, and if worse comes to worst, you can always just throw on your characters t-shirt and call it a day.

Perhaps you want the perfect iconic costume, well boy do you have plenty of things to work with. There are countless combinations of couples costumes that could be pulled off just from Pop Culture icons.

Whether it be Spongebob and Patrick from “Spongebob Squarepants”, Bert and Ernie from “Sesame Street”, Jessie and James from “Pokemon”, or Dora and Boots from “Dora the Explorer”.

Inspiration is all around you, so don’t be afraid to play around with it and have fun. Maybe you aren’t in to the popular costumes that have been done over and over again, well thankfully there are obscure and creative options for couples costumes as well.

Whether you and your partner want to go as rice and salmon to make the perfect sushi treat, or you decide that a set of puzzle pieces may be more your speed because you fit together so well.

Another Idea is to take an inner tube and paint it like a donut. Get yourself a basketball jersey and walk around in the inner tube. Dunk-in’ donuts. Get it?

Or even having one person be a taco and the other dress as Belle from Disney’s “Beauty and the Beast”. Put that together and what do you get? Taco Bell-e.

Most importantly, don’t forget that Halloween is meant to be a time of fun and creativity. It’s okay to take risks with your costume so long as you are having fun with your partner.

Have fun and stay spooky!