What is Likely To Happen This NBA Season 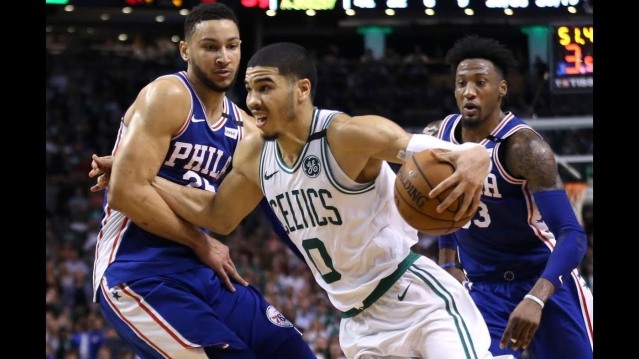 Boston Celtics start the season strong with a win against the Philadelphia 76ers (Credit: ColossusSportsTV.com)

With the 2018-2019 NBA starting after an exciting offseason, it’s that time of year to make predictions on what’s to come.

No one really knows what’s going to happen with injuries and surprise trades possible, but any prediction made for this upcoming season is still possible.

The team that is predicted to win the 2019 NBA championship is the Golden State Warriors, led by all-stars Steph Curry, Kevin Durant, Klay Thompson, and Draymond Green and head coach Steve Kerr, who has coached the Warriors since 2015.

The Warriors added another all-star Demarcus Cousins, who is coming back from Achilles surgery, but whether Cousins comes back as a star or not the Warriors look to win their fourth NBA championship since 2015 and third straight.

Winning the East and facing the Warriors will be the Boston Celtics, looking to come out of the Eastern Conference now that Lebron James is in the Western Conference with all-stars Kyrie Irving, Al Horford, and Gordon Hayward along with potential future all-stars Jayson Tatum and Jaylen Brown.

The Celtics also have elite coach Brad Stevens and a deep bench who can take minutes off of some of the players who still have rust after missing a lot of time last season due to injury.

Lebron James, who joined the Los Angeles Lakers this summer, is predicted to win the MVP. James is already a four-time MVP, but leading a young Lakers roster to home court advantage in the competitive Western Conference and turning them into a title contender can guarantee another MVP for the king.

The rookie of the year is predicted to be Luka Dončić from the Dallas Mavericks, who played terrifically in the preseason.

Dončić is known for his size and versatility on offense and looks to become the face of the Dallas Mavericks in a soon to be post-Dirk Nowitzki era.

For the most improved player, the likely candidate will be Zach Lavine of the Chicago Bulls, who is looking to make the all-star team for the first time in his career.

Lavine only played in 36 games last year due to coming back from an ACL tear in the middle of the season, but Lavine, who scored 30 points against the Philadelphia 76ers in the first game of the season, looks to improve his game and become the face on the Bulls.

Coach of the year is predicted to be Brett Brown of the Philadelphia 76ers, who looks to continue the success the 76ers started having last season.

Things haven’t been easy for Brown since joining the 76ers in 2013, but with “The Process” going in the right direction since last season with Joel Embiid and Ben Simmons leading the way, Brown looks to coach the 76ers to a top 2 team in the Eastern Conference and become a title contender.

NBA players who are predicted to make their first All-Star Game appearance this season are Donovan Mitchell of the Utah Jazz, Tatum, Simmons, and Lavine.

The surprise team that no will expect to be great and make a playoff run will be the Denver Nuggets, who won 47 games last year, but missed the playoffs after losing in overtime in a tiebreaker to the Minnesota Timberwolves.

The Nuggets have young players with potential like Nikola Jokic and Jamal Murray who have proven to be borderline all-stars.

The NBA team that is predicted to be disappointing will be the Washington Wizards.

Despite a more open Eastern Conference and having an all-star backcourt in John Wall and Bradley Beal and adding former all-star Dwight Howard, the Wizards are still likely to come up short against the Boston Celtics, Philadelphia 76ers, and Toronto Raptors due to chemistry issues that showed last season and injuries that usually plague the Wizards.

The big NBA trade that could happen during the season is most likely going to be centered around Minnesota Timberwolves all-star Jimmy Butler, who said back in September he wanted to be traded.

A trade with the Miami Heat nearly got done, but fell apart due to coach and president of basketball operations Tom Thibadeau asking more in return for his prized player, but a trade with another team at some point this season is still possible.