Kavanaugh vs Ford: Battle for the Supreme Court

The He-Said, She-Said Hearings that Moved the Nation 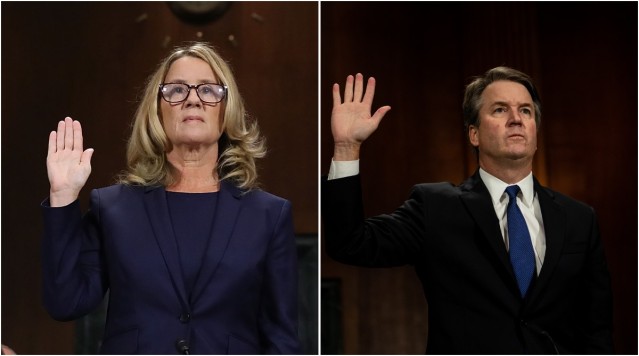 Dr. Ford and Judge Kavanaugh express their side of the story under oath. (Credit: weeklystandard.com)

Both the left and right had someone they believed and stood behind in the case of sexual assault.

It was a battle where people either believed him or her, and a battle where spectators weren’t sure who told the truth. These hearings were settled on people’s opinions of the matter.

People described Ford to have a fine attitude yet was somewhat snobbish. Others thought Kavanaugh seemed to be passionate yet overly aggressive.

Everybody thought the first hearing, done for Kavanaugh alone, was the end of it. When sexual assault allegations were revealed, it was an opportunity to block Kavanaugh and show that he was ineligible to become a Supreme Court Justice.

It was also a way for others to claim that the Democratic Party was making the Justice appointment process a witch-hunt.

The overall situation was a political bloodbath where both sides had passionate answers and even to an extent attacks toward one another. Both committees passed Kavanaugh in the end, the latter being extremely close in an 11-10 vote, deciding that the nomination could land on the Senate floor.

Prior to the verdict, hundreds of protesters flooded Capitol Hill to express their disapproval of Kavanaugh.

Kavanaugh’s side believed that if the assault happened 36 years ago, then the smoke of the gun was long gone alongside the bullet.

In the end, they didn’t believe Ford because there was no physical evidence or eyewitness accounts to contradict Kavanaugh’s case. Most surprisingly, Ford’s best friend stated she never even saw Kavanaugh at the party where the assault occurred.

According to Ford, her and Kavanaugh were both intoxicated at a high school party. It was considered sexual assault because she stated that Kavanaugh groped her in bed.

Ford’s side also noted the references to sex positions that Kavanaugh made in his high school yearbook. But they may have overstepped it by saying Kavanaugh was a rape party organizer.

The American people were extremely split on the hearings due to both sides being considerable, yet having a lack of evidence. We live in a country where the accused is innocent until proven guilty, so the hearing process was grueling yet necessary.

Kavanaugh’s addition to the Supreme Court makes the judicial branch conservative leaning. Five conservative Justices and four liberal Justices, all in their respective degrees of the political spectrum, have predictable voting patterns.

Kennedy was an exception because his voting often fell in the middle of the spectrum. He was not registered as a Democrat or Republican either.

We are still in the period of political savagery where one side doesn’t seem to believe in the concept of innocent until proven guilty, while the other side will rush investigations. Reaching a compromise is long gone in our lifetime as American citizens.

It’s best to listen to both sides intently and make conclusions based on logic instead of party preference. Kavanaugh’s presence on the Supreme Court puts the ruling of Roe v. Wade in jeopardy.

For others that say repealing the case has always been a fear, yet nothing has ever happened, only time will tell.