Behind the 2018 Nobel Peace Prize Winners 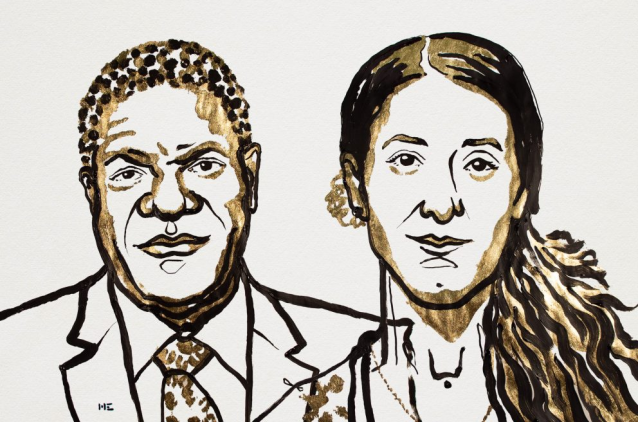 On the fifth of October, 2018, the Norwegian Nobel Committee has made the announcement of the latest Nobel Peace Prize laureates, and their contributions have been pivotal to combating global war crimes.

The recipients, physician and gynecologist Dr. Denis Mukwege and UN Goodwill Ambassador Nadia Murad, have pushed efforts to bring awareness to sexual violence as being a weapon and tactic of war.

While both have focused their efforts in different countries – the Democratic Republic of Congo and the Yazidi population residing in northern Iraq, respectively – they have put their personal health and lives at respect to reach out and support victims while holding perpetrators accountable.

Born in Bukavu, Belgian Congo, Denis Mukwege grew up studying medicine to provide for the ill for those his father (a Pentecostal minister) prayed for. After seeing first hand the complications of childbirth endured by the Congolese women who had no approach to specialist healthcare, Mukwege sought to establish access to provisions for treatment and medicine for patients.

After completing his studies and residencies in France and returning to assist in Congo, the First Congo War triggered inner conflicts. This led to Mukwege founding the Panzi Hospital, which has reportedly treated over 85,000 patients who have been victims of conflict zones, civil wars and mass rape.

When observing the mutilation of genitals and the conditions of patients arriving into the hospital, Mukwege devoted himself to assisting the women through reconstructive surgery. This has resulted in him performing over a thousand surgeries for survivors of rape.

Throughout his career, Mukwege has been celebrated as a human rights activist, an exemplary surgeon and voice of resistance against sexual crimes, which has resulted in a powerful speech given by him in the United Nations, an assassination attempt on his life, and most recently, jointly receiving the Nobel Peace Prize.

Nadia Murad was born in Kojo, a Yazidi village located in the Sinjar District, Northern Iraq. She grew up practicing the ethno-religious Yazidi faith while tending to her siblings and academics till the age of nineteen.

In September 2014, Daesh soldiers invaded and rounded Murad’s community which resulted in the killing of 600 innocents and the abduction of 6,700 Yazidi women, including Murad. The captured “spoils of war” were subjected by their captors to sex slavery, brutal beatings, burned with lit cigarettes, and were gang-raped if attempting escape.

After three months of these atrocities, Murad fled when finding an opportunity of escape and was taken and tended by a neighbouring Muslim family. The family provided all they could and smuggled her out of the Islamic State area, which distanced her from ISIS soldiers.

After living in a container at a Rwanga camp and providing testimonies to reporters of daily newspapers, she and a 1,000 women and children were provided assistance by a refugee programme of the Government of Baden Württemberg, Germany.

Being a victim of war crimes and rape, Murad openly speaks of her painful experience to make others aware of the brutal and primal delinquency that occurs to women during genocide and trafficking.

She became the first speaker to address the United Nations Security Council on these issues and has continued as an ambassador to assist displaced people and victims.

While both Denis Mukwege’s and Nadia Murad’s stories may be intense and foreign to us, it is essential to be aware of these vocal issues.

Women have been demanding change through protest such as the #MeToo Movement, and it is raw experiences such as these that further this message.

This year’s recipients have pushed tirelessly to reach out to those who are blind to these international developments and are entirely deserving candidates of the award. On an upcoming date, they will speak about their recent winnings through a broadcast of the Nobel lecture.