Will a New Congress Shake Up The Political Agenda? 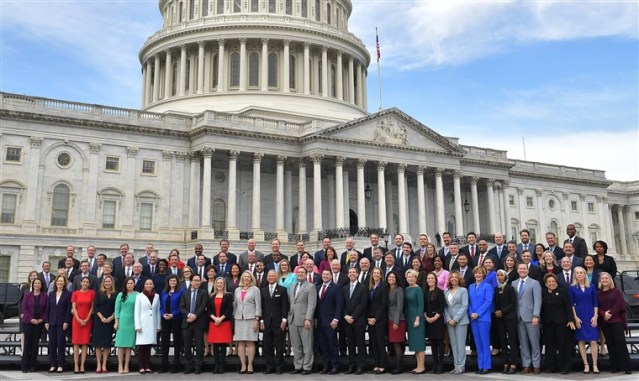 Newly-elected members of the 116th Congress gather in front of the Capitol. (Credit: NBC News)

High voter turnout wasn’t the only reason this election was considered historic. The 116th Congress will be the most diverse yet. Jared Polis was elected to be the first openly gay governor in Colorado.

In New Mexico’s 1st district, Debra Haaland won. Sharice Davids also won Kansas’ 3rd district. Haaland and Davids will be the first Native American women in Congress. Joe Neguse will be the first African American from Colorado to be elected to the House too, reported Vox.

The midterm elections were a victory for women, too. As of now, 107 women serve in Congress. In January, more women will be serving in Congress than ever before.

Democratic socialist Alexandria Ocasio-Cortez won New York’s 14th district by 78%, Vox reported. The district includes parts of the Bronx and Queens. At 29, she is the youngest woman to be elected to Congress.

Ayanna Pressley is the first African American woman to be elected to Congress from Massachusetts. Pressley ran uncontested in the 7th district.

Rose’s campaign focused on ending gun violence, lowering healthcare costs, and reforming taxes for the working and middle class. On a more local level, Rose has promised to tackle the opioid crisis, improve public schools, and pass an infrastructure bill that will improve Staten Island transportation, as outlined on his official website.

The Staten Island veteran will use his House seat to fight corporate interests in Washington. After his military service, he worked in several public service positions, including as Chief of Staff for a non-profit healthcare organization and as a special assistant to a Brooklyn DA.

In New York City, Democrats won all House districts in this election.

As expected, incumbent Andrew Cuomo and Kathy Hochul won the election for Governor and Lieutenant Governor of New York. Kirsten Gillibrand will be rejoining the Senate.

In order for a bill to pass, it must be approved by a majority in the House and Senate. The elected Democratic House and GOP Senate may change the lawmaking process, as Congress is currently dominated by the Republican Party.

The House cannot stop any Presidential appointments, such as Supreme Court nominations. Such appointments are approved by the Senate. The House can conduct investigations, and the Democrats will likely use this power to investigate the Trump administration.

The 2018 historic midterm elections gave power to both major parties. Members of the 116th Congress will take office on January 3rd, 2019. Election season may be over, but changes in Washington are just getting started.