These Teams and Players Are Surprising Everyone 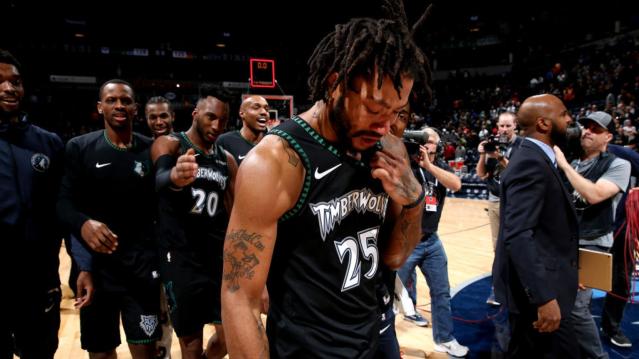 Derrick Rose’s 50 point game on October 31 was a fairytale night for the NBA. (Credit: NBA.com)

It’s 2 months into the 2018-2019 NBA season and so far, there have been many surprises. Some of those surprises have been great, and others disappointing.

One pleasant surprise this season is the play of former MVP Derrick Rose of the Minnesota Timberwolves. The 2011 MVP has been hit with many injuries since he tore his ACL during the 2012 NBA playoffs and at a couple of points during the 2017-2018 season was rumored to be done in the NBA.

This season Rose has proved his doubters wrong, averaging around 18 points a game, shooting the 3 pointer better, and is a frontrunner for the sixth man of the year. On October 31, Rose scored a career-high 50 points in a win against the Utah Jazz, proving he has a lot of basketball left in him.

Another player playing well is Blake Griffin of the Detroit Pistons. Griffin has struggled the past few seasons with injuries, not adjusting to the changing NBA, and being traded to Detroit last season.

Griffin is averaging around 25 points a game and looks like an all-star once again. His play has made the Pistons a playoff team so far.

The Los Angeles Clippers have been one of the most impressive teams so far this season playing great team ball. Predicted to be a lottery team, the Clippers have started the first 20 games of the season with 14 wins and 6 losses and high in the Western Conference standings.

New head coach Mike Budenholzer has the players shooting more three-pointers and star player Giannis Antetokounmpo is looking like a candidate for MVP.

Another player playing really well is JaVale McGee of the Los Angeles Lakers. McGee before joining the Lakers was considered one of the biggest goofballs in the NBA, often being made fun of on “Inside the NBA” by Shaquille O’Neal.

This season McGee is playing his best basketball so far, averaging almost 12 points a game and playing an important role in the Lakers defense, leading the team in blocks with over 2 blocks a game.

One of the most disappointing teams so far this season is the Houston Rockets, who went from winning 65 games and a game away from the NBA Finals to so far not in playoff contention.

Losing key defensive players and injuries to star players James Harden and Chris Paul have contributed to the slow start, but the Rockets have time to catch up.

Part of the disappointment of the Rockets is a player that is also having a disappointing season which is former New York Knicks star Carmelo Anthony, who was released by the Rockets after 10 games only averaging 13.4 points.

Anthony’s future in the NBA is uncertain with teams contending for the championship hesitant to sign the 10-time all-star.

Players have defended Anthony from the rumors that he makes teams worse. While rumors that Anthony could retire are growing, there are also rumors that the Los Angeles Lakers or Miami Heat could give Anthony a chance to play for them, with both teams having two of his closest friends Lebron James and Dwyane Wade.

Another player that has been disappointing this season is the former 2017 first pick Markelle Fultz of the Philadelphia 76ers who is only averaging around 8 points a game.

Fultz looks like he has no confidence when playing, not taken out of the starting lineup, playing very little minutes off the bench, and is currently out with thoracic outlet syndrome, which has affected his shooting.

Andrew Wiggins of the Minnesota Timberwolves has also disappointed this season, not living up to the all-star potential and only averaging around 15 points a game.

Even after all-star Jimmy Butler was traded to the 76ers Wiggins has not taken advantage, continuing to show inconsistencies and evening scoring 0 points November 24 against the Chicago Bulls.

Another team disappointing basketball fans are the Washington Wizards, who are dealing with locker room issues and losing games.

Right now, Wizards center Dwight Howard is sidelined with injuries and all-star guards John Wall and Bradley Beal are in trade rumors, which could possibly push the Wizards into rebuild mode if both players are traded.

It’s still early into the NBA season so things could change, but these teams and players are getting everyone’s attention.