Who Will Take The Cake As The New President Of The United States? 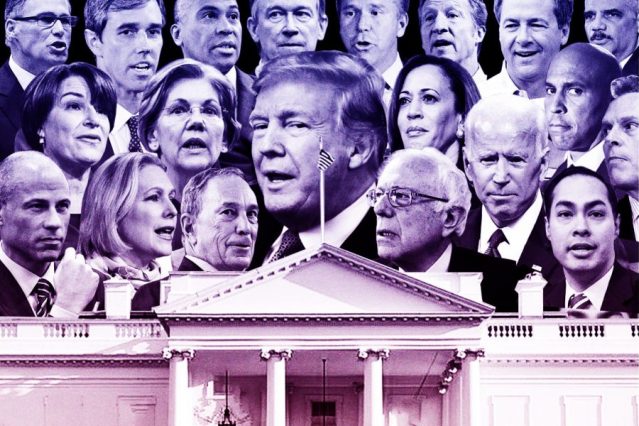 Many Democratic hopefuls are on track to seize the presidency. (Credit: cavsconnect.com)

The Presidential race is on for the 2020 election. In this election there are 13 candidates, plus President Donald Trump running for another four years.  Will President Trump have the golden opportunity to continue to “Make America Great Again?”

Although the election is over a year away, it is important to understand every candidate’s motto. Cast your vote for the person that you resonate with most. The New York Times highlights the background of the candidates that have joined the race so far.

Cory Booker (D) is the a Senator from New Jersey and former Mayor of Newark. “I believe that we can build a country where no one is forgotten, no one is left behind…where we see the faces of our leaders on television and feel pride, not shame.”  Booker’s main concerns revolve around reforming criminal justice and unifying the country.

Pete Buttigieg (D) is the Mayor of South Bend, Indiana and a military veteran. “I launched a presidential exploratory committee because it is a season for boldness and it is time to focus on the future.” Buttigieg “has stressed his generational identity and called for policies on issues like climate change and economic opportunity.”

John Delaney (D) is a former Congressman from Maryland and businessman. “I think I’m the right person for the job, but not enough people knew who I was or still know who I am.”  Delaney “has pitched himself as a bipartisan problem – solver; but has also endorsed liberal causes like universal health care.”

Tulsi Gabbard (D) is the Congresswoman from Hawaii and an Army National Guard Veteran. “There are a lot of challenges that are facing the American people that I’m concerned about and that I want to help solve.”  Gabbard’s main issues include “opposition to American military intervention overseas, including in countries like Syria.”

Kirsten Gillibrand (D) is a Senator from New York and former congresswoman. “I’m going to run for president of the United States because as a young mom I am going to fight for other people’s kids as hard as I would fight for my own.” Gillibrand “has long placed women’s equality and opportunity at the center of her policy agenda.”

Kamala Harris (D) is a Senator from California, former Attorney General of California, and a former San Francisco district attorney. “I believe our country wants and needs some leadership that provides a vision of the country in which everyone could see themselves.”  She “unveiled middle – class tax cut legislation last fall, and has championed a liberal civil rights agenda in the senate.”

Amy Klobuchar (D) is a Senator from Minnesota and a former Hennepin County attorney.“It is time to organize, time to galvanize, time to take back our democracy.”  She “has championed legislation to combat the opioid crisis and drug addiction, and to address the cost of prescription drugs.”

Bernie Sanders (D), the runner up for the Democratic nomination of the 2016 election, is a Senator from Vermont and a former congressman. “The only way we will win this election and create a government and economy that work for all is with a grassroots movement – the likes of which has never been seen in American history.”

Sanders advocates for “Medicare for all,” free college tuition, and decreasing the influence of Washington billionaires.

Elizabeth Warren (D) is a Senator from Massachusetts and a former Harvard professor. “It’s time for women to go to Washington and fix our broken government, and that includes a woman at the top.”

Warren’s main concern is “Income inequality and what she sees as a middle class under attack from big corporations and political corruption.”

While most candidates that have joined the race so far are Democrats, campaigning is only beginning. Voters should expect a range of choices for 2020.