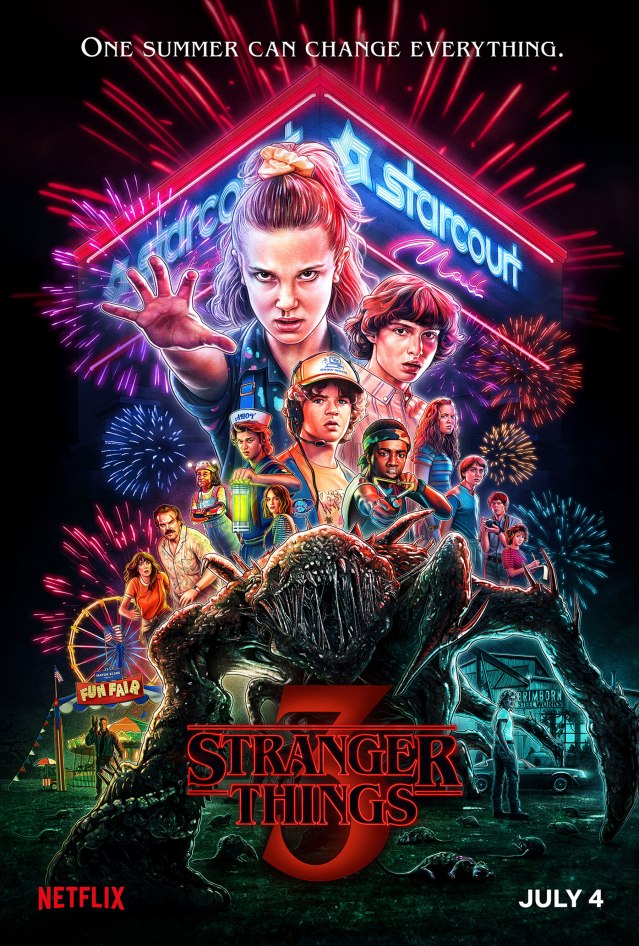 The third season takes place over the summer in 1985. Credit: ew.com

After El, a girl with telekinetic powers as a result of a government experiment closed the gate to the Upside Down, an alternate dimension filled with darkness and monsters called Demogorgons, everything seems to be over.

It seems as though Dustin, Mike, Lucas, Will, El and Max are having fun at their school dance, until we see an ominous shadow monster, called the Mind Flayer, lurking over Hawkins Middle School.

Summertime is here, school’s out in Hawkins, Indiana and the kids are moving on with their lives. Dustin comes back from Camp Know-Where and says that he now has a girlfriend called Suzie. Mike and El are dating, along with Lucas and Max.

Nancy and Jonathan work at the Hawkins Post, Steve works at the ice cream shop, Scoops Ahoy and Billy works a lifeguard.

Although Will’s friends are moving on with their lives, he still wants things to remain as they were when him and his friends would play Dungeons and Dragons in Mike’s basement when they were younger.

Will, who was previously controlled by the Mind Flayer in season 2, is able to sense when it is present and uses this ability to help his friends as the season progresses.

The Mind Flayer is still on the loose after El closed the gate to the Upside Down in season 2, allowing the monster to remain in Hawkins.

Spoilers below, so if you didn’t finish watching season three, avert your eyes!

We soon find out that within the basement of the Starcourt Mall in Hawkins, Russians are using a machine to open the gate to the Upside Down.

Billy, Max’s abusive older brother, gets controlled by the Mind Flayer, who wants to build an army to defeat El. Since she was the one who opened the gate to the Upside Down as a result of the government experiments and possesses supernatural powers, El is capable of destroying the Mind Flayer.

The Mind Flayer has the people that it controls eat chemicals, such as fertilizer and cleaning supplies. This is so that they can break down and form blobs, which can be used to form the physical form of the Mind Flayer.

We are introduced to some new characters this season such as Alexei, a Russian scientist with a love for cherry slurpees from 7-Eleven, Robin, the sarcastic band geek who works at Scoops Ahoy, and Heather, a lifeguard at the pool club.

The season finale was heart-pounding and tear-jerking; Billy and Alexei met their demise, and Hopper has an uncertain fate.

When we get to the post-credits scene, we are transported to a prison in Kamchatka, Russia, where the guards are about to remove a prisoner from their cell, but one of them says, “No. Not the American.” We also see that they kill their prisoners by feeding them to the Demogorgon, which indicates that the Russians have the ability to go into the Upside Down from Russia.

Hopper could be “the American,” because when Joyce turned the keys to close the gate, the gate closed and the machine that was used to open the gate exploded and the other Russian scientists were obliterated. When the camera panned to where Hopper was standing, nothing was there, no trace of him or anything.

This could mean that Hopper went into the upside down before Joyce turned the keys, before the gate closed. He could have wandered through the Upside Down and been captured by the Russians and sent to prison.

Hopper could also be the American because in interviews for season 3, it appears that David Harbour, who plays Sheriff Hopper, is growing out his beard. Could this be for his role as a prisoner in season 4?

Stranger Things season 4 is still in the works, as its creators, the Duffer Brothers have discussed their plans for fourth and fifth seasons for the show.