The Brexit Summer That Keeps Getting Crazier

Boris Johnson Faces A Tough Start To His Prime Ministership 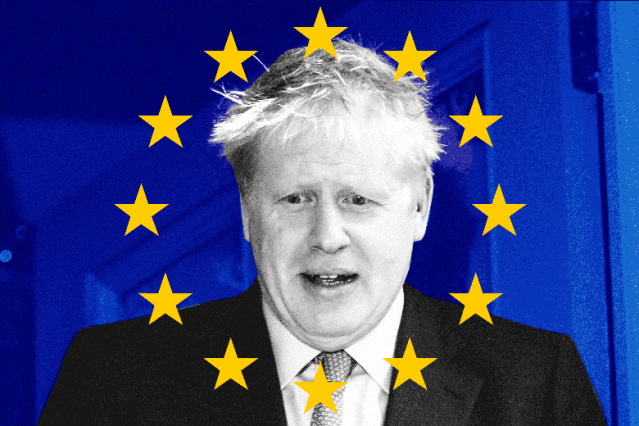 Boris Johnson looking worried about the stars of the EU. Credit slate.com

Brexit in the United Kingdom is still a very hot and divisive issue that has yet to die down. The new Prime Minister, Boris Johnson, is trying to call a general election to see if the people want yet another extension to Article 50 which will likely prolong Brexit into the new year.

This is something that a lot of people probably think wouldn’t happen. To understand why it did let’s go back to the end of May. No, not the month.

Former Prime Minister Theresa May announced that she was stepping down as the Leader of the Conservative Party on May 23rd.

Based on the UK’s parliamentary system, the leader of the party with the most seats in the House of Commons automatically becomes the prime minister. There had to be a new conservative leader race which resulted in a new prime minister.

There were many candidates who wanted to replace May but Johnson was seen as the front runner from day one and he eventually won over Jeremy Hunt with 92,153 Conservative votes.

After Johnson won the leadership contest and became prime minister, he promised to get the UK out of the European Union (EU).

The next following weeks saw Johnson and the EU Commissioner Donald Tusk get into a public spat about changing the backstop and whether or not the EU would accept a new deal. Johnson insisted that the EU should offer a new deal that gets rid of the backstop and changes the withdrawal agreement.

The EU has been very confident in saying the deal they made was the only deal they are offering. Johnson then went to Germany where he talked with Chancellor Angela Markle about Brexit and it seemed that Markle was open to new ideas about how to change the deal, concluding that a new agreement could be reached in 30 days.

This news was great for Johnson because it showed that the EU was starting to become more open to making a new deal with the UK.

Johnson then went to France to meet with President Emmanuel Macron where many in the media thought that Macron would hold firm against changing the deal but he did open up about a new deal.

It seemed more likely that the EU was open to a new deal and the same feeling was being reciprocated at the G7 summit.

This feeling, however, did not last long in the UK while Parliament was in recess because opposition members of Parliament (MPs) had a meeting about a week before Parliament went back into session on how to stop a no-deal Brexit.

Ideas include a vote of no confidence and a bill that would require the Prime Minister to ask the EU for an extension if a deal is not reached and Parliament does not approve a no-deal Brexit. The MPs agreed with a bill to stop a no-deal Brexit but the next day Johnson said that he will stop Parliament for five weeks.

This outraged MPs because it seemed that Johnson decided to prorogue Parliament to stop them from preventing a no-deal Brexit. Johnson and his administration insist that this is about having the Queen’s speech to lay out the government’s agenda.

The opposition MPs are not buying it and they plan on spending their only week in session before suspension to stop a no-deal Brexit. They will pass legislation that will force Johnson to seek an extension.

While the bill was being debated, Johnson lost his majority in Parliament when one Conservative MP left the party and joined the Liberal Democrats.

Johnson also threatened any Conservatives who voted against the government with expulsion from the party but that didn’t stop them. Johnson lost his first vote in Parliament with MPs voting to take control of the Parliament agenda.

The next day MPs voted for the bill which passed the House of Commons and House of Lords.

MPs in the House of Commons will vote on the bill on September 9th where it will likely pass and become law. Johnson says it is up to the people to decide who is going to the EU Summit in October and this just brings the craziness of Brexit into uncharted territory.