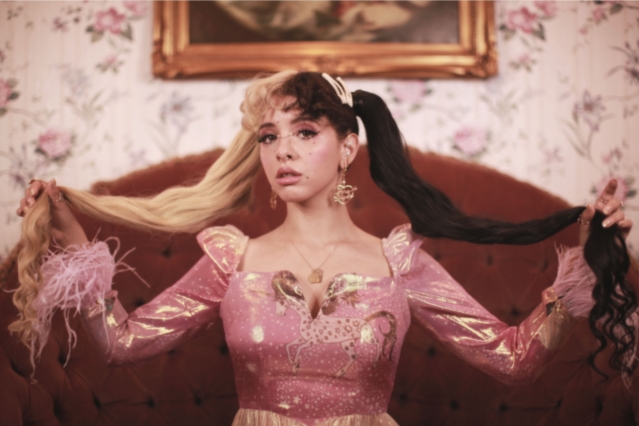 Melanie Martinez is known for discussing serious issues through her music.
Credit: press.atlanticrecords.com

Melanie Martinez, who has blown up since she was a contestant on “The Voice” in 2012, recently released her new album titled “K-12.” This album discusses topics such as body image, bullying, and eating disorders, which are common in school settings.

Melanie tries to tell a story through her albums. Her previous album, “Cry Baby” tells the story of her persona of the same name who grows up and is becoming more aware of the world around her. Now, in “K-12”, Cry Baby attends a K-12 sleepaway school, which is the backdrop for the album.

Her album incorporates a bright and cheerful pop type of beat to her songs, whereas her lyrics discuss a dark subject matter. Since her album focuses on kindergarten through high school, Melanie incorporates sounds common to school such as a school bus’s running engine, office phones ringing, school bells ringing, and chalk on a chalkboard.

All of the songs in Melanie’s new album were pleasant to listen to, however some songs that hit hard were “Show & Tell,” “Nurse’s Office,” “Strawberry Shortcake” and “Orange Juice.”

“Show & Tell” talks about how although Melanie is famous, she is a human like everyone else and makes mistakes and isn’t perfect in every way. For the film, Melanie appears as a puppet and dances via strings, which shows that because of her fame, she is often looked at by society, like she’s on display for all to see, like a puppet.

She discusses how she is scared to voice her own opinion or she will be criticized and be forgotten about; “There are strangers takin’ pictures of me when I ask “No more” It’s really hard for me to say just how I feel I’m scared that I’ll get thrown away like a banana peel.”

In her song “Nurse’s Office” Melanie incorporates sounds of people coughing and sniffling and band aids being ripped off to enable the listener to visualize being in the nurse’s office at school. During this song, Cry Baby hates going to class so much that she fakes being sick in order to escape from the bullying she endures in the classroom.

“Strawberry Shortcake” talks about body image and how not everyone looks so skinny like a model or Barbie doll; “Feeling unsure of my naked body stand back, watch it taking shape, wondering why I don’t look like Barbie, they say boys like girls with a tiny waist.”

The song also addresses how women are often perceived a different way based on their appearance; “‘Cause it’s how I look and not what I think.” “Strawberry Shortcake” also discusses how some women who get sexually harassed may blame themselves because of the outfit they were wearing that led up to the incident; “It’s my fault, it’s my fault ’cause I put icing on top
Now, the boys want a taste of the strawberry shortcake.” However, it is never the victim’s fault.

In the song “Orange Juice,” Melanie discusses eating disorders such as bulimia. Cry Baby’s friend, Fleur in the movie struggles with bulimia since she wants to be skinny and remain friends with the popular girls at K-12 if she loses weight.

Cry Baby consoles Fleur through the song and tells her that she is beautiful just the way she is; “I wish I could give you my set of eyes ’cause I know your eyes ain’t working, mhm I wish I could tell you that you’re fine, so fine, but you’ll find that disconcerting.”

Melanie also wrote and directed a film for her album, which was also titled “K-12.” The film was shown in theaters across the country and is currently on YouTube.

The film shows Cry Baby’s journey through K-12 sleepaway school as she soon learns the horrifying truth about the school.

Melanie’s songs flow throughout the movie and the choreography for the songs were entertaining to watch.

In an interview with People Magazine, Melanie said that she will be making two more albums which will have their own films. She will also be going on her “K-12 Tour” which begins on October 13th.

This album was a nice sequel to the “Cry Baby” album and allowed the listeners to follow the story of Cry Baby’s maturation from childhood into adulthood.