CSI Is Leaking, Rotting and Breaking. Does Anybody Care?

he stairwell window in 3N is covered with black and green substance. Credit: Salvatore Cento

Let me start off by saying that this following piece might be the straw that breaks the camel’s back. For those of you that haven’t heard that saying before, the following article might be eye opening for those that don’t usually take a step past those nighttime events at the Center for the Arts.

The following piece might be a little distracting for those that attend only the galas and dinners where grants are announced and money is raised.

Kill me that I’m trying to stir up a little attention. Sometimes pictures themselves don’t do enough justice. But that is certainly not where this ends.

In the past, I’ve let this issue slide. Be that I was distracted or I just never dared to push limits. But within a timespan of just three days, I had some very startling experiences which showed me that the time was now.

Significant academic upgrades that will make life on campus that much more beneficial.

On October 16th, there was a serious rain shower for almost the entire day and as usual, leaks broke through various buildings on campus. Now, that line might come as a surprise to those who don’t attend classes here regularly.

Yes, it’s true. Without fail, water that naturally falls from the sky now and again causes noticeable punctures to some establishments here at the College of Staten Island.

A leak in 1C near various forms of electricity. Credit: Salvatore Cento

At least the two buildings that I traverse on a weekly basis, 3N and 1C had distinct problems. The situation in 1C was especially disturbing because not only was the water dripping through a patch in the ceiling where wires were visible, but there was a closed door just left of the leak labeled “Electrical Room.”

I proceeded to dig further and analyze the situation deeper. Everything I say in the following paragraph is backed up with photographic evidence.

Slippery, and sometimes warped stairwell platforms, cracked, boarded up windows, tiles dangling halfway or even missing from the ceiling, tiles missing from the floor, tiles that are being pulled down because of exit signs, water fountains that are bagged up with black garbage bags, paint jobs that are rotting, the insides making way for the water to drip are all examples of how CSI is crumbling. 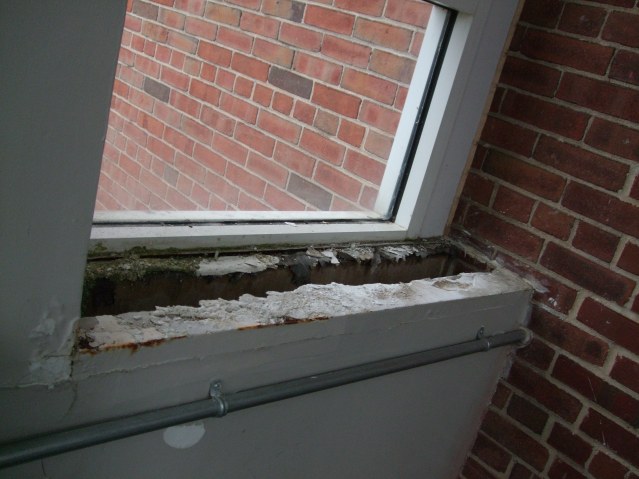 A piece of the windowsill is missing and pollutants are scouring through in 5N. Credit: Salvatore Cento

Window sills have giant breaking gaps with colors of green and yellow protruding from them. That’s not algae.

Not only can physical problems occur but over a long period of time, health can become an issue too. Why is there a green color? Why is there a yellow color?

What happens if someone has prolonged exposure to the particles coming out of the wide gaps in the stairwell?

Students that wish not to be named have seen ceiling tiles fall to the ground while in class. Another one told me that they found rat droppings in a classroom.

But at the end of the day, when all of the complaints that could be made are shouted out, do they actually stick?

Does CSI care more about the student or the individual that comes in for an event with big pockets? Does the school want to make the graduate or make the headline?

Let’s see what happens when the problems are printed. Someone might actually do something about it.