All content, unless otherwise stated, is copyright of The Banner Newspaper. All rights reserved.
Student Profiles

The Man of Tomorrow or the Man of Yesterday?

Can a Timeless Storyline Prevail or Prove to be Passe?

The extraordinary worlds of superheroes and the iconic characters living within them have captivated audiences worldwide; according to CSI student Isaiah Walton, the saga continues.

Isaiah first became interested in superhero comics as a young child after realizing that his favorite Saturday morning cartoons were available at the library as comic books.

“I would go to the library and read whatever comics they had,” said Isaiah Walton. “If it was a comic, I’d read it.”

Since 2000 both Marvel, DC and Warner Brothers have released over 25 superhero films, and other production studios such as Netflix continue to add various superhero based miniseries to their portfolio.

It appears as though the fan base and demand for superhero based content continues to grow globally, despite the fact that many of these films have identical storylines and character structure.

According to Statista, Marvel Comics ‘Avengers: Endgame’, which featured a variety of popular comic characters, many of which already have their own films, earned $2.7 billion worldwide. Enthusiasts like Isaiah often pay significant sums of money to not only see their favorite characters live on the big screen but also obtain their favorite comic books. 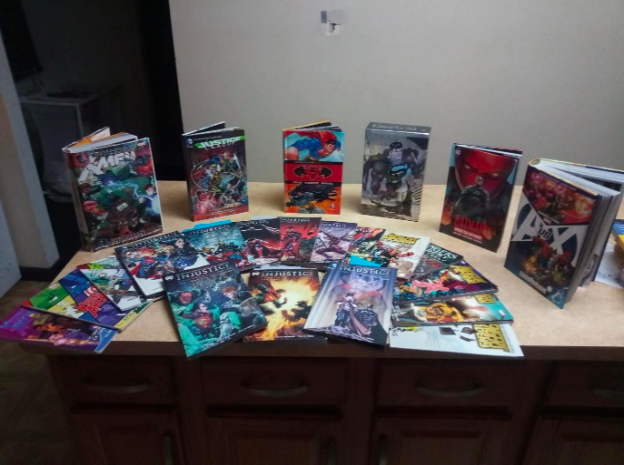 Filled with colorful graphics and larger than life storylines comic books have been a popular pastime throughout the world for years. Credit: Isaiah Walton

Isaiah estimates paying over $100 for his favorite series of “Wolverine and the X-men” and believes to this day it was worth every cent. There are many fans out there like Isaiah who continue to fuel this evolving cinematic transition from books to the theater while also introducing new fans from younger generations along the way.

Superman, who was introduced in 1938, is one of the world’s most popular superheroes with various movies and shorts about his life and ongoing disturbances with villains dating back to 1941. Isaiah took a particular interest in this character and has begun writing a script he hopes one day will make it to Hollywood as many Superman films have before.

“The fan base surrounding Superman is particularly intense because he’s a character that’s especially challenging to get right,” said Walton. “He’s not dark or gritty, he’s extremely overpowered, he literally has the longest ongoing comic history to delve into, and he’s indestructible.”

The character of Superman, originally created by Jerry Siegel and Joe Shuster, has since been the subject of many other screen writers and comic book authors. Isaiah, who estimates his Superman script will take up to five years to finish and edit, is hoping to generate his own take on the age old narrative.

Walton almost always works on his script from home during downtime throughout his day, often working through the nights. Credit: Isaiah Walton

Using similar storyline structure as films like Star Wars and Avatar the Last Airbender, the scripts’ primary plot focus will be “overcoming the monster.”

Those familiar with superhero tales might recognize this form of plot sequencing because many Superheroes use their ability to fight crime, villains and diverse threats while also facing turmoil of their own.

In his script Isaiah intends to expand on the Superman v. Lex Luthor conflict and pitch his draft to Warner Brother Studios, who currently holds the rights to the character. Isaiah’s biggest struggle however seems to be the development of dialogue and his inability to find writing courses at CSI that are specific to the kind of creative writing needed to produce such a script.

The question remains, however, whether Superman will continue to be of interest to enthusiasts like Isaiah moving forward in a world that has now been introduced to a variety of other superheroes with personalities larger than this one, yielding special powers we might have never even imagined. Isaiah remains optimistic that the audience’s adoration of the character of Superman will carry on.

“When you write for a character that has been around for 82 years, you’re not afraid whether or not their movie will bring in people,” said Walton. “At the end of the day a solid, imaginative, and compelling world of extraordinary beings will always be popular in the human consciousness.”