“Friends” Spin-off is Slated to Release in 2022 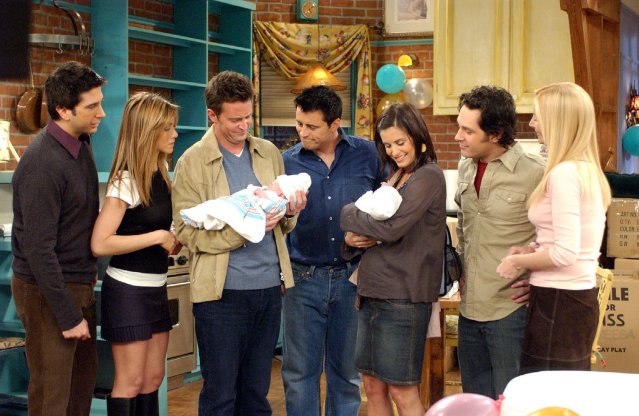 The children of the “Friends” characters have their own show. Credit: thesun.co.uk

The widely popular show “Friends” is now getting a spin-off that will focus on the main characters’ kids who are now grown up and in college. NBC announced Friday, March 13th that the show will be called “Friends: The Next Generation.”

Set in present day New York City, the children of Ross, Rachel, Monica, Chandler, Phoebe and Joey go to NYU to pursue their college degrees. Little do they know that their parents were all friends. The group grows close with one another after college orientation and decide to rent apartments in the same apartment building.

The famous coffee shop, Central Perk is still present and the kids often hang out there before and after their hectic classes. The coffee shop is more modernized for the new generation, but will be run by Sophie, Gunther’s daughter.

Emma, Ross and Rachel’s daughter, played by Willa Fitzgerald, is the down to earth girl with her mother’s fashion sense and her father’s love for paleontology.

Lorenzo, played by Nick Robinson, is Joey’s son who aspires to be an actor like his father. He knows how to pick up the ladies, he’s a smooth talker and knows a good sandwich when he sees one. He is his father’s son after all…

Sophie, Gunther’s daughter, played by Dove Cameron, is a successful business woman who takes over Central Perk from her father and soon becomes close friends with the group.

Erica and Jack, Monica and Chandler’s twins are played by Joey King and Dylan Minnette. Erica wants to be a kindergarten teacher and is quiet and reserved. Jack wants to study computer science and is more outgoing and helps pull Erica out of her shell.

Ben, Ross’s sarcastic and witty son, played by Cole Sprouse, aspires to be a writer for the New York Times. Phoebe’s daughter Lila, played by Dakota Fanning, is studying environmental science and is passionate about preserving the earth. She has an optimistic and outgoing personality, making everyone she talks to her friend.

Eventually, the parents all find out that their kids are living in the same building when they go to their apartments to help them move in. They’re pleasantly surprised at the close bonds their children have with one another. This brings back memories from when the parents lived in their apartments and the crazy shenanigans they would get into.

The cast also had their first script reading session and HLP Media got the latest scoop with Willa Fitzgerald. She mentions the close chemistry the cast has with each other. “It’s incredible how easily everyone gets along with each other. It’s like we’re a whole big family and that chemistry really works its way into the scenes. I can’t wait for everyone to see the finished product, it’s heartfelt, funny, and relatable to this day and age.”

Dove Cameron also mentioned the close bond that was developed by her castmates. “We would go over lines with each other and I haven’t known many of them for that long, but it felt as if I were talking to one of my closest friends.”

“Friends: The Next Generation” will follow the trials and tribulations of college students such as pulling all-nighters, living on your own, dating dilemmas and the conflicts and resolutions of friendship.

NBC says that the series is slated to appear on the channel April 4th, 2022. It is unclear about how many seasons NBC ordered, but the first season is definitely confirmed.