An Unspoken Crisis Across the Country: Evictions

An Estimated 30-40 Million Americans at Risk of Eviction 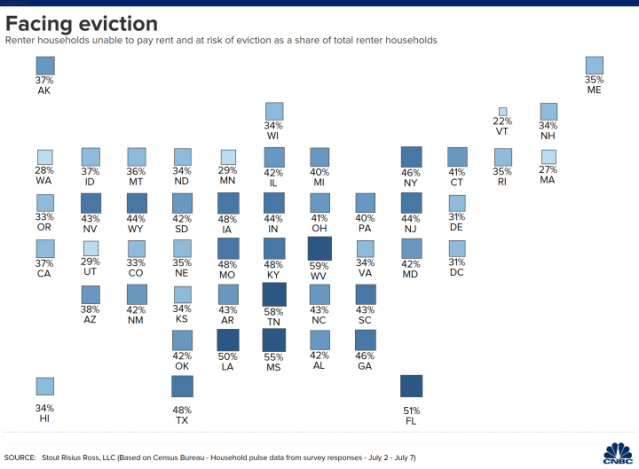 Percentage of people state-by-state at risk of eviction. Credit: cnbc.com

The United States is in the middle of multiple crises facing the nation, the economy having 13 million less jobs than it did before the pandemic started. The U6 (Real) Unemployment Rate is 16.5% and 82 million Americans are uninsured or underinsured due to their healthcare being linked to their employment.

But there’s another issue that the mainstream media has also been putting to the side. According to the U.S. Census Bureau, about 30-40 million Americans are at risk of eviction and if conditions do not change, an estimated 29%-43% of rent households could face eviction by the end of 2020.

A comparison that shows just how much of a catastrophe this is is that in 2016, there were about 2.3 million evictions.

The numbers aren’t even comparable to previous years. The closest examples to this disaster in recent time are the Subprime Mortgage Crisis and Great Recession.

The CARES Act put a moratorium on all evictions up until July 24, which has already passed. The somewhat recent Trump Executive orders fall short of putting another moratorium on evictions.

However, state governments such as NY have extended moratoriums on evictions up until October 1 while other states such as West Virginia have no protections on evictions whatsoever.

West Virginia is also the state that is the hardest hit out of all the states. A whopping 59% of renters are at risk of eviction in the upcoming months in that state, alone.

Other states such as Tennesee (58%), Mississippi (55%), Louisiana (50%) and others have no state-wide eviction moratorium. The state that is least affected by this is Vermont, where 22% of the state is at risk of eviction but there is a moratorium in place.

Alongside that, cities have not been excluded from suffering this situation. About 25% of NYC renters haven’t paid their rents since March. This eviction crisis especially affects African American and Hispanic/Latino neighborhoods where unemployment rates are higher and inequalities in access to resources exist.

A Milwaukee study shows that women from black neighborhoods made up only 9.6% of the city’s population, yet they accounted for 30% of evicted tenants.

Another study from the Massachusetts Institute of Technology shows that a whopping 78% of eviction filings in Boston were from communities of color.

The U.S. Census Bureau also shows that about 42% of Black renters and 49% of Hispanic have little or zero confidence that they would be able to pay their rents in the upcoming month.

The top reason for bankruptcy in the country is medical debt. This all goes hand-in-hand especially now when we’re in an economic recession that is arguably worse than the Great Recession.

The Executive Orders that Trump put were nothing more than watered-down half measures where he didn’t even put a moratorium on evictions. Unemployment benefits went from $600 to $300-$400 depending on if a state paid 25% of the unemployment benefits.

In addition, these measures could permanently damage Social Security and Medicare with his attempts to cut the Payroll Tax which directly funds those programs.

A single mother in California with twins has already been evicted from her home and was forced to live in her car. This is the type of situation the United States is dealing with.

Protests are occurring where they block landowners from filing eviction notices to the court. Just wait until these protections are removed and potentially millions of Americans could go homeless in the upcoming months with us already having 500k homeless people.