Khabib defeats Justin Gaethje by submission in his last fight 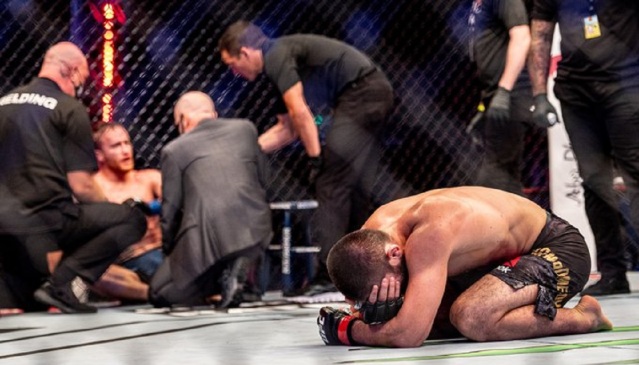 Khabib cries after dedicating this victory for his father who passed away. Credit: geosuper.tv

UFC 254 was an anticipated event because it involved two great MMA fighters that came from two respective victories in their last fights. Khabib Nurmagomedov was still undefeated in the UFC while Justin Gaethje won against Tony Ferguson, an intense competitor.

Many UFC fans anticipated a Khabib/Ferguson fight, but Ferguson had Gaethje to beat first. Gaethje earned his title shot by getting a TKO win in the 5th round against Ferguson.

Khabib was going into this fight differently because he didn’t have his trainer, his father Abdulmanap Nurmagodov. On July 3rd, Khabib`s father died at the age of 57 due to coronavirus complications.

Khabib was extremely distraught because his father was his mentor and taught him everything that had to do with martial arts. Khabib and his father had a close relationship but the future was uncertain for Khabib`s MMA career.

Although there was speculation that Khabib wasn’t going to fight Gaethje, he announced that he started training, was ready to defend his lightweight title, and remain undefeated. Leading up to the fight, many UFC fans had been wondering whether or not Khabib could even win this one seeing as if he were to retire, he’d ultimately still be the greatest to step in the octagon.

His record before this fight was 28-0 which suggested he would be the favorite against Gaethje. On the other hand, Gaethje was known to be a fierce fighter who always looks to TKO and knock out his opponents. This was a fight between a fighter who likes to strike and attack while the other is a smart fighter who looks to make people tap out.

Before the fight would start, Khabib was looking like he was extremely nervous; he was breathing heavy but at the same time trying to be composed while Gaethje was fully confident and ready to get his hands on Khabib. In the first round, Gaethje looked for those aggressive strikes he likes to do while Khabib was looking for his famous takedowns.

Khabib though, also did some strikes of his own in which he won most of them. That made him the clear winner of Round 1 and things weren’t looking so good for Gaethje.

Round 2 was enough for Khabib to win the fight after he used a triangle choke move to make Gaethje nearly reach unconsciousness. Gaethje tapped about four times and the referee stopped the fight; Khabib ultimately won again by submission and remained undefeated with a record of 29-0.

After the fight, Khabib was emotional. He dedicated this to his father and was about to announce his retirement from the UFC.

“This was my last fight,” said Khabib. “There’s no way I’m going to come here without my father.”

He is blessed to leave the UFC undefeated and said that he promised his mother that he would not continue to fight since his father passed away.

UFC president Dana White praises Khabib after the fight and calls him one of the greats in the UFC. He noticed the Russian MMA fighter was feeling different before the match.

White says Khabib broke his foot three weeks before the fight, further showing his character and determination to keep going. White doesn’t expect Khabib to come back from retirement and respects his decision either way.

What Khabib has done in his UFC career makes him one of the best in the world as his career ends with a record 29-0.