Chelsea, the Champions of Europe! 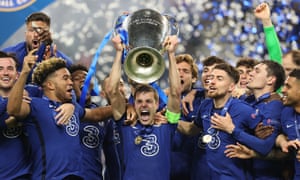 In the end, Chelsea managed to capitalize on one of their chances to win the game and are the champions of Europe for a second time. The first time was back in the 2011/2012 season when they defeated Bayern Munich in penalties. The hero for this final was Kai Havertz, who scored the only goal in the game.

The game started intense as Manchester City looked to pressure Chelsea. Man City would come close a couple of times as Raheem Sterling almost got a clear shot on goal before Chelsea’s Reece James came in to disturb Sterling. City`s Phil Foden would also get a chance on goal as his shot was blocked by a world-class tackle by Chelsea’s defender Antonio Rudiger. Chelsea had the better chances though, as striker Timo Werner had two clear chances on goal but couldn’t finish the plays correctly.

Chelsea`s player of the year, Mason Mount, passed it to Werner who just needed to make contact with the ball to get a shot on target, but he missed the ball. On the other chance, Werner made contact, but there wasn’t enough power.

Thiago Silva had to abandon the game early due to an injury when he attempted to win an aerial ball. In the 42nd minute, Mount with an amazing through ball put Havertz one on one with the Man City goalkeeper Ederson Moraes. Ederson committed early and Havertz put the ball past him and just tapped it in the empty net.

Chelsea led at halftime and the players of Man City looked devastated. In the second half, Chelsea looked to maintain the lead but also looked to score another goal to kill the game. Chelsea`s N`Golo Kante ran the show again as he dominated the midfield.

He disrupted the flow of Man City, and he also started some counterattacks in which Chelsea looked dangerous.

An unfortunate injury in Kevin De Bruyne occurred in the second half when he collided with Rudiger face to face. De Bruyne`s right eye was hurt and had to be subbed off. Manchester City Legend, Sergio Aguero, played his final game for the club and tried to help his team to tie the game, but time was running out.

American Cristian Pulisic would also be subbed on in the game and was close to scoring after a great pass from Havertz but Pulisic put the ball wide. City insisted and kept attacking but they couldn’t find a shot on target.

The referee gave an additional seven minutes, but City still couldn’t score. Riyad Mahrez would find the ball outside the box and hit a volley, but the ball passed just over the post. This was the final chance of the game and the time was up. Chelsea wins the game 1-0 with a fantastic performance.

The man of the match was N`Golo Kante, who kept Chelsea in the game. Kante helped the Blues both defensively and offensively. Kante was all over the pitch and the whole Chelsea played amazing in keeping the City attack quiet.

Another praise goes to Thomas Tuchel, who came in January after a slow start by Chelsea with former manager, Frank Lampard. Tuchel transformed this team, and many fans didn’t expect such a transformation to lead to a Champions League triumph.

Two Champions League titles now for the London club and has made their fans present and at home proud. An amazing display of football by Chelsea; they’re fully deserving of the champion title.