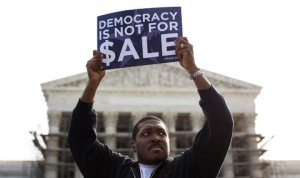 The national discourse in recent years has varied between the world of fantasy and the often neglected real world. Due to fanatic media outlets and ignorant lawmakers in Washington, America finds itself burdened with non-important distortionary policies.

Whether these unimportant issues were manufactured or just a result of years of misinformation and ignorance there remains the fact that America as a country, and a part of a global community, needs to resolve petty issues in order to progress.

For instance, the penultimate struggle between Republicans and Democrats, in the form of markets and corporations, highlights an outdated model of governance held by some politicians that have been draining the resources and morale of the nation for far too long.

With the election of George W. Bush to the presidency – and even before then, into the administrations of Clinton and Bush Sr. – came a neo-renaissance of non-regulatory policies and pro-corporation initiatives; perpetuated by an ideological return to the golden age of Republican politics championed by the beloved “gipper,” Ronald Reagan.

These policies, perpetuated throughout the very end of the 20th Century, have been directly linked to the events such as the housing bubble and the subsequent financial crisis in 2008-9 as well as fueling the growing income gap within the country. According to the Congressional Budget Office top earning households, otherwise known as the omnipresent 1%, increased their incomes by 275% in 2011. This in a society where some live paycheck to paycheck.

Although I recognize that a predominantly free market and capitalism are the best ways to progress society and fulfill societies’ wants and needs, and that if a person earns her wealth, than I will be among the first to defend that person and her achievement, it has become a sad fact in this country that corporations are referred to as “people” and money is equated with “speech.”

It seems in this country we have allowed an overt crime such as corruption to leak into the fabric of our democracy in a very covert way. From Supreme Court decisions such as Citizen’s United to the most recent campaign finance decision, McCutcheon v. Federal Election Commission in which on April 2 2014 the court decided to remove aggregate individual spending on elections meaning limits imposed on wealthy donors have now been discarded.

The problem: this decision essentially boils down to the more money you have, the more sway you hold over the electoral process. Our democratic system has been turned into a subscription system. Our free package comes with one vote but you can go for the super platinum electoral donor plan and that gets you a lot of benefits – hell, spend your way to office. In the majority opinion written by Chief Justice John Roberts he stated, “…we have made clear that Congress may not regulate contributions simply to reduce the amount of money in politics, or to restrict the political participation of some in order to enhance the relative influence of others.”

Of course Justice Roberts, if certain candidates didn’t have the large amounts of cash to throw at television ads, flyers and posters, door to door electioneering, and attack ads I’m sure their “relative influence” would decrease, but wouldn’t you agree that’s due to their fundamentally awful political platform?

It seems the court has decided that “political participation,” which is blatant corruption, is fine as long as you do a good job of hiding it and Congress doesn’t catch you.

No, I’m sorry Republicans, free speech and first amendment rights for corporations and wealthy individuals aren’t the problem here, it’s that everyone else’s vote in this country is now devalued that much more by the inflation of campaign finance and nothing is stopping this plutocratic march.

Personhood in regard to corporations has long been a focus of contention between the two ideological points on the spectrum. If corporations are “people” and money equals “speech,” then the law should apply equally to mega-corporations as much as any other individual. Most recently, General Motors recalled 2.6 million cars due to faulty emission switches. This flaw has been blamed for at least 13 deaths. This flaw has been known by GM since 2001 and was studied by their internal review department for four years. This flaw was reported to cost only 57 cents to repair. And they did nothing.

So far, all GM has received in punishment is a slap on the wrist in the form of a Congressional hearing. I predict at most a fine. And that’s the real travesty, that people’s lives can be put at risk without their knowledge and GM, which is a “person,” will not face criminal charges. Just like in the aftermath of the 2008-9 banking crisis.

Irony also has a part to play in this absurdity when various groups advocate on behalf of these large corporations. Take straight-forward journalistic reporters Sean Hannity and Rush Limbaugh, who espouse the troubles of the barely-working class. High earning CEO’s and corporations who are just are being persecuted unfairly by socialist policies.

When a false pretense makes its way to Capitol Hill it manifests into subsidies and tax breaks. The whole concept of “corporate welfare” serves as a slap in the face for people who can’t even gain access to real healthcare. How can anyone talk about the lack of availability to social services, such as “Keep your government hands off my Medicare,” when they advocate giving millions of dollars of subsidies or tax breaks to billion dollar companies who quite frankly don’t need the lift from Uncle Sam.

This especially doesn’t make sense when many of these companies create unregulated externality – which in the socioeconomic definition means negative side effects inflicted on others as byproduct of business. In the case of GM, the externality would be the deaths caused by a bad business decision, a decision made outside the power of those who died but a decision that ultimately proved fatal to the said party.

One prevalent externality which especially in recent time has become ever more poignant is pollution. According to the U.S. Energy Information Administration, in 2013 the four largest energy sources the United States derives its energy from are Liquid Fuels/Petroleum at 35.97 quadrillion BTUs or British Thermal Units, Natural Gas at 26.22 quadrillion BTUs, Coal at 18.31 quadrillion BTUs, and Nuclear/ Uranium sources at 7.93 quadrillion BTUs.

Not a clean fuel industry in sight unsurprisingly. The oil, gas, and coal industries are the biggest companies, get the biggest subsidies, have the CEOs with the biggest paychecks, and retain the biggest grip on America’s energy consumption.

Also relatively banal yet distressing is the fact that these industries are without a doubt the biggest polluters in the United States. According to Mother Jones, the top ten polluting sources in the United States are all coal power plants. Close behind, according to Forbes, are oil giants Exxon and BP, and Dow Chemical/Industrial.

Between air pollution, fracking, and water pollution caused by runoff wastewater chemicals, the externality of pollution has been hard hitting. One only has to look at the great environmental damage occurring in China, due to a rapid increase in their manufacturing and energy supply sectors, to see what potential threat CO2 and toxic emissions can do to affect everyday life.

Nevertheless, the most dangerous thing facing the United States on this matter is not the emissions or even the polluters. It’s the deniers. Like the abolition of slavery and the adoption of publicly funded healthcare, America is once again behind the rest of Western industrialized countries when it comes to climate science.

The pollution and the bad policies are only side effects of the disease of ignorance that has plagued this country for far too long. The mere fact that in the year 2014, a whole 44 years after the founding of the Environmental Protection Agency, the President has to stand in front of the American people during his State of The Union address and affirm the validity of climate change as a signal that change needs to occur and quickly.

The disease of climate change denial comes in many forms, all equally toxic to the objective of combating issues facing our environment. First up, the lobbyist; usually an employee of an oil or coal company pushing legislators to keep a blind eye to externalities while hustling for that extra subsidy to go on exploratory surveys in foreign countries that aren’t exactly friendly to the United States.

Next, the Fox News watcher/climate denial apologist who uses common phrases such as, “How can there be global warming if it’s snowing right now?” or “There has ALWAYS been global warming!” These climate experts, often marketers trying to pitch climate denial or just ignorant people, religiously cite that there “hasn’t been a consensus in the scientific community.”

News flash! There has been a consensus for a very long time. According to a study conducted by John Cook and other researchers at SkepticalScience.com entitled “Quantifying the consensus on anthropogenic global warming in the scientific literature,” Cook found that not only do 97% of scientists agree that global warming exists, but also that it is human-caused.

The last groups of people that do inadvertent harm are apathetic people. This happens to be the majority of Americans. While I fall on either side with apathetic people in most other issues, climate change is one issue where we cannot afford to leave environmental issues on the backburner of American discourse.

A new Intergovernmental Panel on Climate Change study states that if there isn’t a “slashing [in] global emissions by 40 to 70 per cent by 2050 from 2010 levels”, then “temperatures will increase by about 4 to 5C… a level that could reap devastating effects on the planet.”

We don’t have time for ignorance nor do we have the time for empty arguments about the “persecution of corporations.” It’s quite simple, either we eliminate unfounded debates from our national discourse or suffer growing inequality and risk the health of our planet. These are not hard solutions. Since when has accountability, responsibility, equality and a healthy environment become lofty ideals only fit for a literary utopia? Come on, we’re better than that.