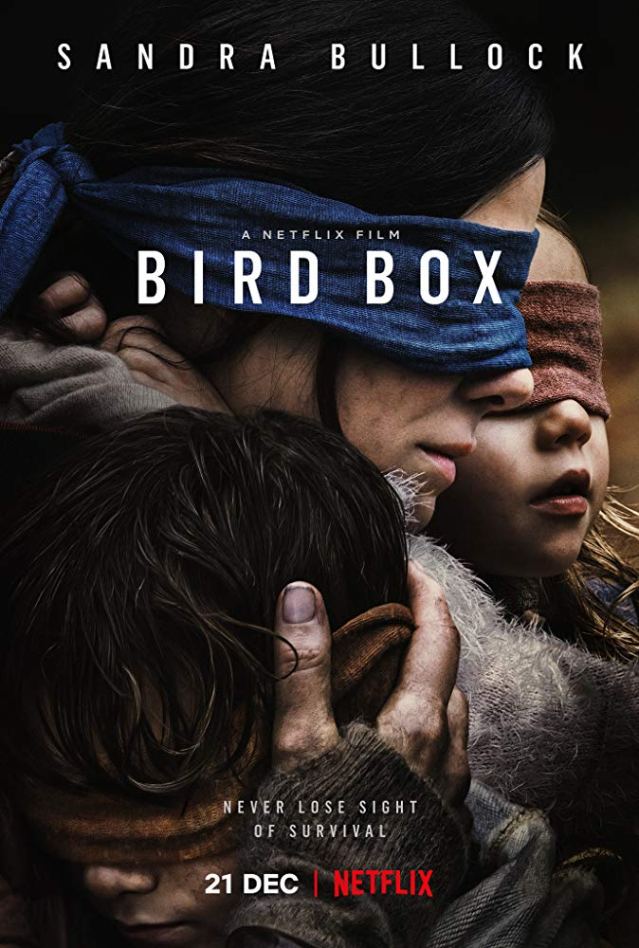 Sandra Bullock dons a blindfold as she navigates her way through “Bird Box”. (Credit: imdb.com)

Sandra Bullock stars in a new thriller that takes place in the dystopian United States, after an unseen species invades, causing people to go insane by having them imagine their own worst fears.

Bullock must protect her family and whatever they do they must never remove their blindfolds.

“Bird Box” is a post-apocalyptic thriller film based on Josh Malerman’s 2014 novel. Sandra Bullock portrays Malorie, a single mother who learns of an invasion of an unknown species that takes on the form of a person’s worst fears and makse people insane and kill themselves upon looking at them.

She decides to take matters into her own hands as she and her children wear blindfolds and venture into the forest and across a river to travel to a refuge.

Malorie and other survivors have barricaded themselves in a house, covering the windows and doors to isolate themselves from the mysterious entities.

She is then persuaded by the other survivors that she should venture out to the refuge in order to live a better life with her children.

The film keeps the audience anticipating what will happen next; one scene from the trailer includes Bullock rowing a boat through a river with her children blindfolded. Another scene shows Malorie and her children in the woods ringing bicycle bells to alert each other of their locations.

“Bird Box” premiered at the American Film Institute Fest on November 12. It will be released on Netflix on December 21.

Malorie cares about her children even though she doesn’t show it often. In the trailer, when she is stranded from her children, she begs the entity to not take them from her.

Malorie’s sister, Jessica is played by Sarah Paulson. She is known for her work in “American Horror Story”.

Trevante Rhodes plays Tom, who is a survivor from the infestation. He is known for his role in “Moonlight”.

The role of Douglas is played by John Malkovich, who is known for his roles in “Red” and “Of Mice and Men”.

Rosa Salazar portrays Lucy. She is known for her work in “American Horror Story: Murder House”, as well as some of the “Maze Runner” films.

Danielle Macdonald plays Olympia, another survivor. Macdonald is known for portraying the main character Patti in the film “Patti Cake$”.

“Bird Box” is directed by Susanne Bier, a Danish film director who has won a Golden Globe, Academy Award as well as an Emmy Award. Bier discussed with the Hollywood Reporter Malorie’s characteristics as portrayed in the film:

“This is a woman who feels reluctant about motherhood, who doesn’t feel comfortable with it. But she’s also so elemental about survival, she’s got that razor-sharp point of view. In that space, there isn’t really any room for the kind of love that she’s got inside her but isn’t going to let out.”

Malorie doesn’t give her children names and instead refers to them as “Girl” and “Boy”. She even trains her children to heighten their other senses to improve their chance of survival.

“Bird Box” is an emotionally intense, heart-pounding thriller. This intriguing film will keep your eyes glued to the screen, so you won’t miss a moment.