Mercury in Retrograde: How “Bohemian Rhapsody” Misses the Mark

Queen Biopic Has its Moments, but Fails to Stand Out 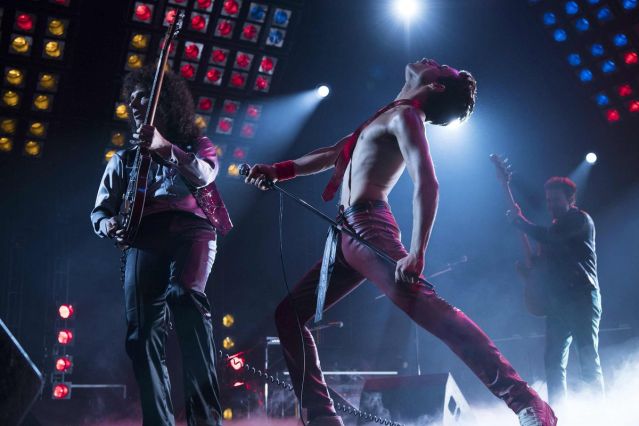 Dramatic entrances. Ringing guitar solos. Mesmerizing vocals. Legendary rock band, Queen, has long been associated with musical grandeur, and audiences expected no less from “Bohemian Rhapsody,” which was released in the United States on November 2.

The biopic tells Queen’s story through the eyes of singer Freddie Mercury, played by Rami Malek, weaving his personal life into the band’s career.

Mercury, having changed his name from Farrokh Bulsara, first meets his bandmates at a gig for a band called Smile. Two of its members are guitarist Brian May, played by Gwilym Lee, and drummer Roger Taylor, played by Ben Hardy.

As the band ascends the ladder to stardom, Mercury deals with personal challenges. After proposing to longtime girlfriend Mary Austin, played by Lucy Boynton, he finds himself questioning his sexuality.

Many of his struggles relate to his romantic life and how his internal conflicts affect people around him. The characters’ hardships are often framed by Queen songs, such as “Somebody to Love” and “Love of My Life.”

The soundtrack, composed by John Ottman, is one of the film’s strongest assets. The official album includes 11 unreleased versions of popular Queen songs. It includes “Doing All Right,” which was originally performed by Smile.

Brian May even arranged his own version of the classic “20th Century Fox Fanfare,” which replaced the original orchestral version during the intro.

Though no two-hour movie could cover every aspect of Queen’s dynamic story, “Bohemian Rhapsody” seems to rely on the road-to-stardom trope that often appears in musical films.

At times, it uses disappointing clichés to push the story forward, which do not align with the unique personalities of its characters.

While the troubled Mercury grapples with his relationships, he acts foolishly, driving a wedge between him and his bandmates. While they are introduced with unique personalities, Mercury’s bandmates morph into one character by the end of the film.

May and Taylor become parent-like, acting as voices of reason, urging Mercury to change his ways before he hurts the people he loves. Deacon often falls to the back, a mere afterthought.

Mercury’s personal relationships are also troublesome. Despite a rushed beginning, the movie still manages to establish the wholesome, pure nature of Mercury and Austin when they are together.

However, since so much time is spent on his first relationship, we miss out on his longtime partner Jim Hutton, played by Aaron McCusker. Hutton’s brief appearances does not match the large role he played in Mercury’s life, especially when the latter was suffering from AIDS.

Some critics argue that Mercury’s homosexuality is painted as promiscuous and immoral, while a heterosexual relationship with Austin is the only meaningful connection he can hope to have.

Perhaps the biggest issue with “Bohemian Rhapsody” is the manipulation of Queen’s timeline. The deliberate choice to shift Mercury’s AIDS diagnosis two years back stunned critics. In the film, Mercury reveals that he has AIDS before performing at Live Aid in 1985, while he was actually diagnosed two years later.

“Bohemian Rhapsody” fails to portray Queen as a paramount act, falling back on lackluster tropes and poor directing choices.

However, Rami Malek’s portrayal of Mercury is believable and enchanting, breathing life into a weak story. He approaches his character with attitude and grace, which so beautifully represents the character that audiences can’t help but fall in love with both Mercury and Malik.

Despite poor writing, the film is saved by a vivacious, dedicated cast, impressive wardrobe, and emotional ending. The depiction of Live Aid at the end of the film is shockingly accurate and equally moving, as Mercury leads an enormous crowd in song.

The film received a rating of 62% from Rotten Tomatoes and 49% from Metacritic. Thanks to a cast with incredible talent, “Bohemian Rhapsody” is worth a watch.