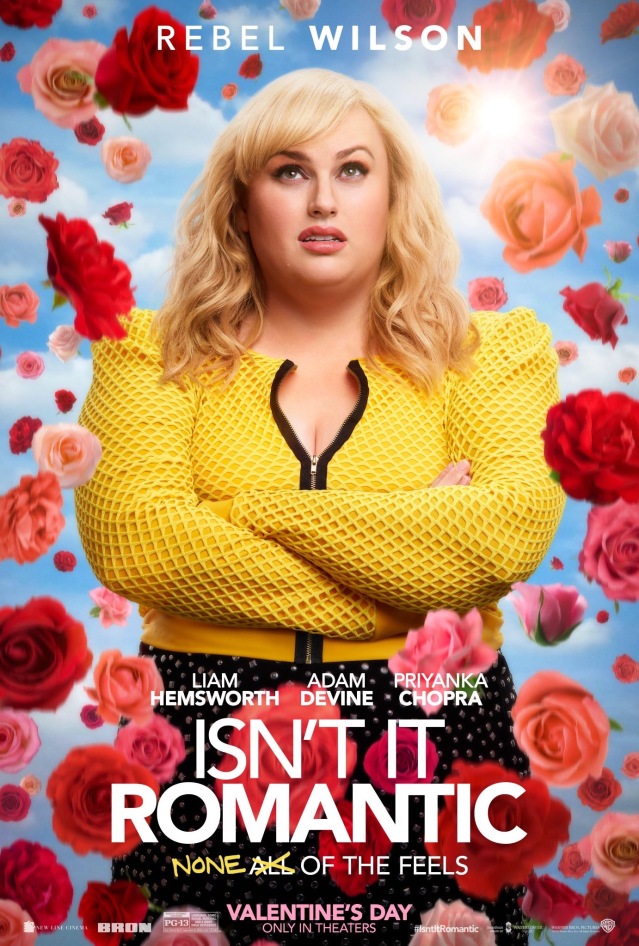 After she escapes being mugged, Natalie, a New York architect, hits her head and wakes up in a lavish apartment and a different reality. She later finds out that not only is she living in a rom com, but a PG-13 one!

Natalie, played by Rebel Wilson, must live a life in a stereotypical romantic comedy movie and have someone fall in love with her in order to escape this reality.

“Isn’t It Romantic” has stereotypical television tropes such as the gay best friend, the handsome guy who later becomes the protagonist’s love interest, the sudden break out into song and dance and the typical love triangle.

The satirical movie pokes fun at the typical cheesy attributes to a normal, generally PG-13, romantic comedy, such as censorship of cursing and sexual content.

Growing up, Natalie and her mother detested romantic comedies because the protagonists never looked like them. The main characters were always skinny and attractive women and there wasn’t any representation of plus-sized girls. Natalie and her mother felt that since they didn’t look like Julia Roberts on their television screen, that they weren’t considered beautiful.

Now that Natalie lives in her own rom com movie, she can live the movie of her life and be the star.

As a producer of the film, Rebel Wilson wanted to diversify the movie to make it appeal more to modern day society.  In an interview with SheKnows, Wilson discussed why she wanted to diversify the cast; “for me, it was really important to cast Priyanka as one of the coleads. This is a modern rom-com, and the stereotypical hot chick doesn’t have to be a skinny white blonde.”

Rebel Wilson makes her debut in the film as a plus-sized protagonist.

Although Rebel Wilson is not the first plus sized woman to star in a romantic comedy film, she understands how representation is important and how her role can make other plus-sized women feel represented in the film industry.

The film also includes some singing and dancing numbers. Since Rebel Wilson and Adam Devine were both in the Pitch Perfect franchise together, they were able to relive the experience.

In an interview with PopSugar, Rebel Wilson described the onscreen chemistry she has with Adam Devine, since they had worked on the Pitch Perfect movies together.

Wilson said that sometimes for scenes, her and Devine would improvise; “a lot of it was R-rated, so it gets cut out [laughter] because the movie is PG-13… But I think you can pick it up in the film because we’re so natural, the way we talk to each other. We do the scene as written, but we always like to make things up too.”

Although the film is hilarious in nature, it takes a slight detour to include the element of self love. This was a refreshing direction that the movie took.

In an interview with SheKnows, Wilson detailed the long filming days in the New York heat; “It was 16-hour days, sometimes six days a week in the heat of the summer in New York. The conditions were brutal for someone like me who sweats all the time. I can’t tell you how hot it was, and we were on real locations without a lot of air-conditioning.”

“Isn’t it Romantic” will brighten up your February with its comedic and satirical elements. The film was released on February 13th and will also be released on Netflix on Feb 28th.

So grab your friends or your beau and get ready to enjoy this romantic parody.